We have covered a variety of documents scanners (read our reviews here) and announced the new Epson ES-500W Duplex Document Scanner, almost a year ago (read the announcement here.)

We’ve now had an opportunity to do a hands-on review and think that Epson has another strong entry into the SOHO and Small Business scanner market. 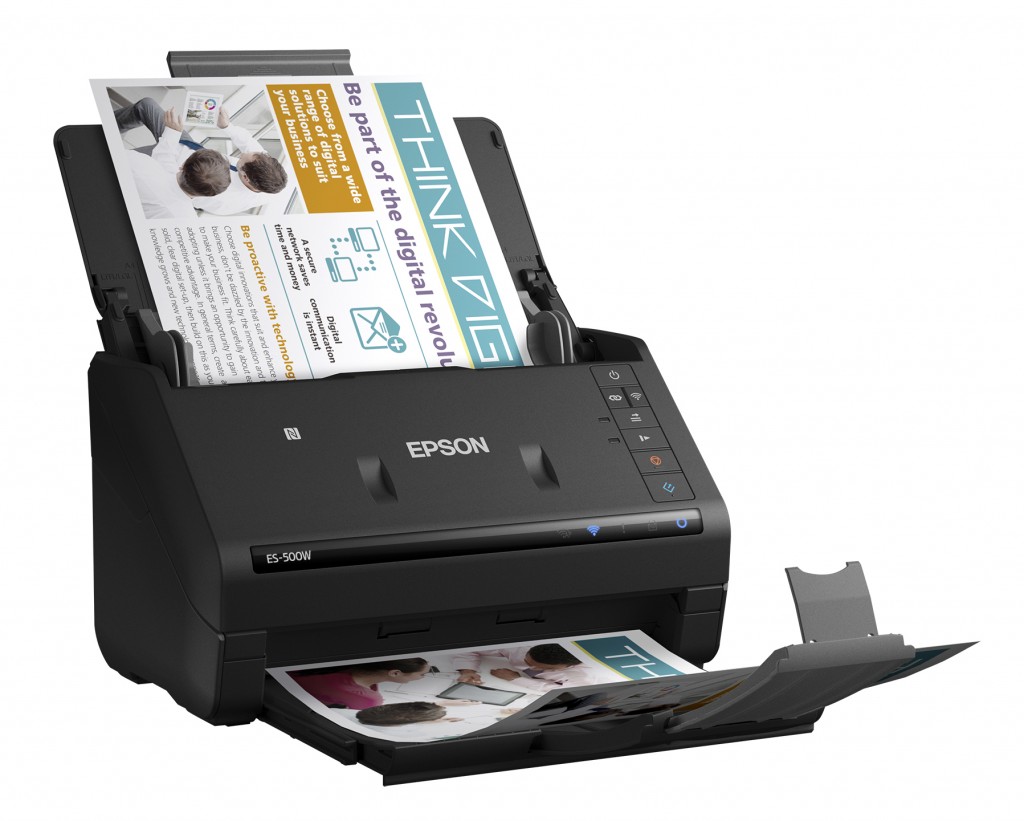 The Epson ES-500W Duplex Wireless Document Scanner is marketed as a desktop scanner for home and small office which seems to be the right fit, but we could also see it being right at home in even a medium sized office.

In the box is the ES-500W scanner, a SuperSpeed USB cable, AC adapter, power cord and Start Here poster.

The scanner has a solid feel to it and has a profile like most of the Epson scanners we have tested. Measuring 6.6” x 11.6” x 6.9” and weighing 8.1 lbs., you will probably want to have a separate table or shelf to put it on since it would overpower most desks in a home office.

The scanner’s top cover folds up and out to reveal the automatic document feeder (ADF) that can handle up to 50 sheets at a time ranging from 2” x 2” to 8.5” by 240”, although we can’t image a document 20 feet long. The scanner is rated for 35 pages per minute (ppm) duplex which results in up to 70 images per minute, based on 300 dpi scans in color, black & white or gray scale. It is rated for a daily duty cycle of 4,000 pages.

Tucked neatly into the bottom of the unit is a slide-out paper tray with built-in paper stop to collect the sheets as they exit the scanner. This is particularly handy when you have a large document to scan since at 35 ppm, it can be difficult to catch them all by hand.

Here is a YouTube video to highlight some of the features of the Epson ES-500W.

The hardest part of the set-up was removing all the packing material. Epson puts a piece of blue tape across every surface that could possibly move during transit. Not only on the outside of the unit but on some of the interior surfaces as well. We’re not complaining. Rather, you need to inspect the unit carefully as you unpack it to make sure you get all the tape off before trying to use the scanner.

With the scanner unpacked and ready to use, the next step is to install the software package. As has become customary practice, there are no disks packed with the scanner. Rather you can go to the appropriate website indicated on the Start Here guide and download what you need. The current Epson software package supports OS X 10.6.8 and higher.

The actual installation process was quick and easy and typical of our prior experience with Epson software. Included in the software package are the drivers and network protocols needed to connect the scanner to your Mac and network as well as two scanning applications, Document Capture and Epson Scan 2. After the installation is complete, you have the option to connect the scanner to your Mac via USB or configure the Epson ES-500W wirelessly.

Getting a scanner connected to our network has historically been problematic and our first attempts with the ES-500W was not different. As hard as it tried, the software was not able to connect the scanner to our Airport Extreme Base Station. As we have said in the past, we think this is more an issue with the Airport Extreme rather than with the Epson software.

At this point, the Start Here guide would be of no further help. Fortunately, Epson provides a comprehensive 141-page User Guide (available here), which instructed us to try the EpsonNet Config application, included in the software package. You enter a few critical pieces of information like your network’s SSID and password. The software finds the IP address of your Epson ES-500W and joins them together.

We have struggled in the past trying to make scanners their own access point, connecting the scanner to our MacBook Pro and then transferring that connection to the network. While that usually worked, it usually took several tries to make it happen. Using the EpsonNet Config application, we connected the ES-500W to our network on the first try. In the end, this turned out to be one of the easiest Epson installations we have done. We will note here that during our several weeks of testing, the scanner did drop its network connection several times. Fortunately, on each occasion, the EpsonNet Config utility opened automatically and re-established the network with little to no input from us. We were never able to figure out what caused the dropped connections but the recovery was so quick and painless that we almost don’t care.

We tested the Epson ES-500W for several weeks and have run several hundred pages through the ADF. We didn’t keep count but would say that better than 95% of the pages went through on the first pass with no paper jams or double feed issues. On those rare occasions where there was a jam, it was usually associated with a page that was previously creased or had severe damage to the top edge.

Pages that had multiple folds, like bills that come in a standard business envelop, were not an issue and the ADF did an impressive job separating the multiple pages folded together to prevent a double feed situation.

Overall scanning speed was good. In one test, we scanned 102 letter size pages with a mix of single and double=sided originals. The Epson ES-500W identified each page correctly and there were no blank pages or missed scans in the entire package. The scan took a total of 1 minute and 46 seconds and the final file was a mere 2.5 MB. We have used commercial scanners costing thousand of dollars and while they may beat the Epson ES-500W on speed, the file compression could not be matched with the Epson file size being much smaller.

We did have some issues with thicker plastic cards, like credit cards. They started to go into the scanner but would report a jam and never complete the process. The ES-500W has a button on the front pane to temporarily over-rise the duplicate feed detection. Activating that button before beginning the scan eliminated the problem and cards scanned without issue.

Were also had some issue is with those extra-long receipts you get from some retail outlets (think Best Buy, supermarkets and certain pharmacies). The scanner read almost the entire receipt but about halfway through or near the end, depending on the length, would stop and report a paper jam. We did not have any other paper in the ADF besides the receipt so there way, no paper jam. We tried this several times, using both the standard scanner setting and the receipt setting preconfigured in the Epson Scan 2 software with the same results each time. In the end, we had to scan the receipt twice, once starting at the top and once starting from the bottom and keep the two scans together as one document.

The two programs are similar in the end result with the biggest difference being that the Document Capture program has the ability to scan directly to cloud services like Dropbox, Google Drive and Evernote, while Epson Scan 2 is needed if you want to use the Scan Job button on the front of the scanner.

Admittedly, we have always been confused as to why Epson offers two scanning programs. It would be one thing if one was for Windows and one for Mac but having two programs for each platform has to keep their developers pretty busy, and a little confusing for their customers.

Document Capture and Epson Scan 2 have different workflows and we can’t say one is better than the other. We ended up using Epson Scan 2 for most of our tests, not because of the results but because it seemed to fit our scanning workflow better. Our suggestion is to try them both and see which one best suits your needs.

If neither of those applications suit you, Epson includes a TWAIN driver that allows you to use the scanner with most popular scanning programs, like Adobe Acrobat Pro.

Epson also has a dedicated page regarding support for the latest Mac OS update High Sierra. For ongoing details, you can check the page here.

We have reviewed a lot of Epson scanners and the Epson ES-500W is a strong contender. The hardware is well built and the 50 sheet ADF will get you through those large scanning projects without breaking a sweat.. This is a tough piece of hardware that has a look and feel that says it is ready to take on the day-to-day challenges of a small office. With a 4,000 page daily duty cycle, it should stand up to whatever you throw at it.

We were impressed with the scanners ability to handle large scanning jobs without paper jams and its ability to detect single from double sided pages.

The self-storing paper tray is a nice addition and something that we often miss on other scanners we have tested.

When we compare the Epson Document Scan and Epson Scan 2 applications to the Control Center application, which came with our Brother ADS-15—W scanner (read our review here), we still think Brother’s software has the edge, but that’s because of how the Brother software interacts with the Finder. However, we think the Epson software does a better job at file compression during the scanning process and that makes attaching scans to an email much easier.

The Epson ES-500W scanner has a one year warranty and an MSRP of $399.00 but is available at a deep discount from Amazon.

If you like all that the ES-500W has to offer but don’t want of need the wireless functionality, consider the Epson ES-400.

We wish to thank the folks at Epson for providing the ES-500W for our review.