Apple has made some changes to its iPod lineup and as of today (July 27, 2017) it appears the iPad Nano and iPod Shuffle have been discontinued while the prices on the iPod Touch have been changed.

It’s been awhile since Apple made a significant upgrade to the entry-level iPods. 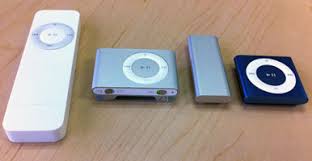 Apple introduced the iPod Shuffle at MacWorld on January 11, 2005,when Steve Jobs introduced “One More Thing” and showed how to put 1,000 songs in your pocket.

In all, there were four generations of the iPod shuffle and other than some color changes in July 2015, Apple last updated iPod shuffle in September 2010.

The iPod Nano was first introduced in September 2005.

In total, there were seven generations of the iPod Nano.

Other than some color changes in July 2015, Apple last updated the iPod Nano in October 2012.

The iPod Touch was introduced on September 5, 2007 and is now the last and only iPod offered by Apple. Currently in its 6th generation, the iPod Touch was last updated on July 15, 2015 and has an average update of 574 days.