With the popularity of laptops and digital music, many people look for external speakers to improve the sound quality when working at home or in the office.  If the speakers built into your portable Mac leaves you wanting more, check out the Bose Companion 2, Series III Speaker System.

The Bose Companion 2, Series III speakers are not a new item.  The current version (Series III) has been around since about 2014 and represents a mostly cosmetic upgrade to the prior Series II version. 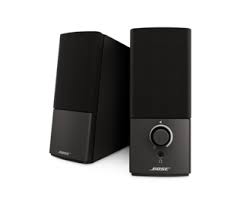 The speakers have a solid feel but are not overly heavy.  The two speaker design eliminates the need for a separate sub-woofer on the floor or under your desk.  In addition, without the sub-woofer, there are a few less wires to manage.

The speakers have a nice matte black finish with a cloth grill on the front. The single knob on the front of the right speaker adds to the clean lines and they would certainly look appropriate in a more formal office setting compared to some of the other speaker systems we have seen.

Both speakers measure 7.5” high X 3.1” wide X 5.9” deep.  The right speaker, which contains the volume control, and all of the connections on the inside, weighs in at 2.3 lbs. while the left speaker is slightly lighter at 1.8 lbs.

In the box are the two speakers, a slim designed AC power pack, the cable attached to the left speaker which plugs into the right speaker and an audio cable with a stereo mini-plug and both ends to connect the audio out jack on your computer to the computer input on the speaker.

Setting up the Bose Companion 2 Series III speaker system takes no time at all.  Set the speakers on your desk, connect the left 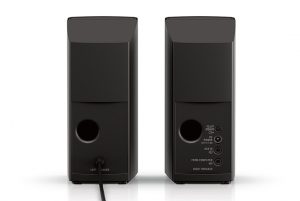 speaker to the right, use the included audio cable to attach the speaker to your computer and plug in the AC power pack.

Before we fired up the speakers we were a little skeptical of what we would find.  The only control on the speaker is the volume control.  There is no ability to adjust base or treble.  But Bose is known for its ability to produce superior sound from the smallest of speakers and the Bose Companion 2 Series III is no exception.

Each speaker has a passive base port on the rear and we found the overall sound quality to be excellent with just enough highs to make vocals and strings crisp while not overpowering the room with excessive base.  Even at higher volumes, the sound remained clean with no distortion.  The speakers produce more than adequate volume for just about any office of mid-sized room but keep in mind these are intended to be computer speakers so you shouldn’t expect to fill a concert hall with them.

While these speakers are advertised to be used with your computer, you could just as easily attach them to an Apple Airport Express and use them to stream music over Airplay.  Bose also offers a Bluetooth add-on unit that attaches to the Auxiliary Input jack on the back of the speaker which allows you to stream music wirelessly from you iOS device.

Just as no two people see color the same way, how we hear a particular sound can also differ greatly.

Some people may be perfectly satisfied with the sound produced by their computer’s internal speakers.  For those looking for something more, the Bose Companion 2 Series III speaker system provides a great alternative and is well worth your attention.

The Bose Companion 2 Series III speaker system has an MSRP of $99.95 is available from Amazon.

Do you use external speakers for your computer or for something else?  Why not join the conversation and leave a comments below.