The Apple Watch continues to be the best selling smart watch on the market and continues to enhance the Apple Watch by introducing additional watch bands in a variety of styles and colors. Like so many of the products that Apple produces, the Apple Watch has spawned an entire industry of third party watch band providers. And, like other Apple products, not all third-party products are created equal. But if you are interested in changing the look of your Apple Watch without paying Apple’s prices, we think you should take a serious look at Southern Straps.

We first discovered Southern Straps on Amazon and at that point only saw a couple of different styles. In looking at their own web site, we found that Southern Straps offers a dozen different bands with two in leather (black and brown) and a variety of nylon bands, which have a strong resemblance to the nylon bands offered on Apple’s site.

Southern Straps – Your Strap, Your Way

When you select an Apple watch band, you are locked in to the accent color that Apple has decided works best for that color band. In the Apple Watch band pictured above (it’s the one on the left), which Apple calls, Black Stripe Woven Nylon, it comes with black accents on the adapters and buckle area. That would look great on our Space Gray Series 3 Apple Watch but not something we might want to use on our Silver Series 2 and probably not on a Gold watch either.

Southern Straps allows you to select not only the size of your band but also the color of the accents.

Here is the Southern Straps, Black and Gray Nylon band with each of the accent colors offered. 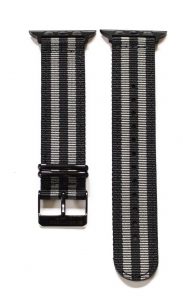 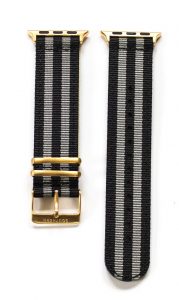 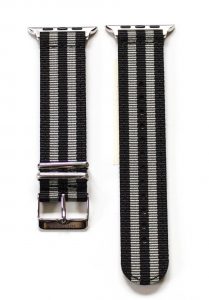 As you can see, the different accents change the look of the band, and since the Southern Straps web site allows you to see all options for all of their watch bands, you can make an informed decision prior to your purchase.

We found the fit and finish of the Southern Straps bands to be excellent. The stitching on the nylon bands was even and had no loose ends or pulls. All of the hardware is sturdy and even the small metal bands that hold the excess strap in place is thick enough to hold its shape.

We do want to mention that if you looked at our product review video, you may have seen what appeared to be peeling of the finish on some of the metal surfaces. In fact, what you are seeing is the plastic protective coating that is on some of the metal surfaces when you receive them. To be honest, the plastic was initially so clear, we didn’t realize it was on the metal and did not remove it prior to filming our review. Once we realized it was on, we removed it and now have a beautifully finished surface.

Southern Straps is a U.S. based company and proudly displays that fact by imprinting their name and location on the backside of each band along with the Southern Straps logo. That may seem like a trivial point but in today’s world of gray market products that often times are of inferior quality, it’s nice to see a company proudly advertising themselves. As we like to say, “It’s nice to buy something that has a mother and father.”

Our only negative comment about Southern Straps, and we hesitate to actually call it a negative, it that the bands were extremely stiff when we first received them. In our opinion, that is actually a reflection of the quality that goes into these watch bands. It was also nice to see that Southern Straps anticipates this reaction from its customers and included a care card with the watch bands so we knew what to expect. 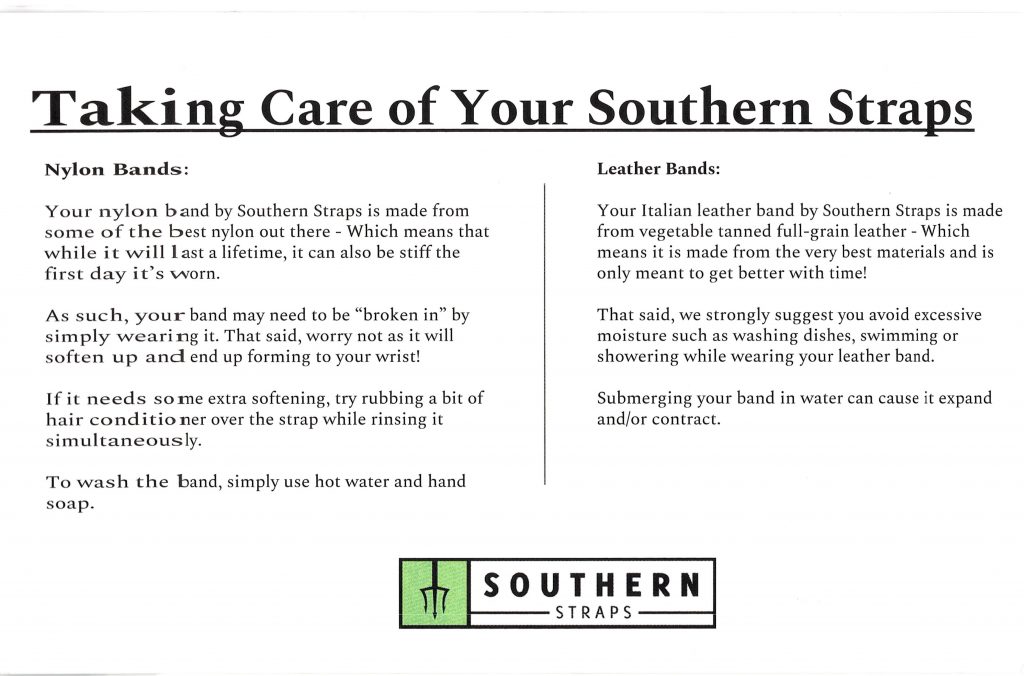 Sure enough, as stated on the card, after several days of wearing them, the straps conformed to our wrists. They were never uncomfortable but after the “break-in” period, they are even a better fit.

We can also say that after several weeks of daily wear, the Southern Straps bands look as fresh as the day we took them out of the package and in spite of what we would consider some harsh treatment, have no stains or tears.

People are often skeptical about purchasing third party accessories for their Apple products. There are more than a few examples of people receiving inferior quality products that ultimately are not worth the savings that came with their low prices. And while taking a chance on a watch band doesn’t have nearly the risk of a cheap lightning cable or power supply, no one wants to waste his or her hard earned cash.

A limited selection of Southern Straps watch bands are available from Amazon and the Apple Tech Talk Marketplace, including the Black and Grey Stripe, Military Green, Khaki and Red Stripe, and Blue, White and Red Stripe.

To see the full selections of styles and colors, check out the Southern Straps web site here.

We would like to thank the folks at Southern Straps for providing several straps for our testing and review.