Perhaps the biggest complaint we hear about the Apple Watch has to do with battery life. While most people can get the better part of the day’s use from a single charge, for people on-the-go, it can be bothersome to have to pack the dedicated charging cable and a power adapter, and it’s not always easy to find an open power source. And while you can always use an external battery pack to attach the charging cable, it’s just one more thing to carry. If this sounds like you, you need to check out the wiTraveler Apple Watch Charger.

Opening the wiTraveler Apple Watch Charger reveals three pieces, the actual charger that the watch is attached to, a self-switching 110-240v AC power adapter, and a flat, ribbon cable style USB-A style male to female cable. There is also an instruction sheet. 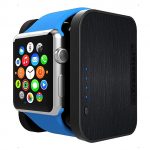 The charger is made from an abrasion resistance polycarbonate and sports an interesting satin black finish on the sides. Inside the charger is a 1400 mAh high density lithium polymer rechargeable battery that will provide 3 charge cycles for the Apple Watch. On one side of the charger is a small button with four blue LEDs that indicate the remaining battery power in the charger.

On the backside of the charger is a standard female USB-A outlet that allows you to direct the internal battery power to something other than an Apple Watch. Also, on the back is a cut-out with a male USB-A connection. This is where the included AC power adapter connects to the charger. The adapter has a standard US two-prong plug which folds away when not in use. This leaves you with the same physical size and shape of the wiTraveler Apple Watch Charger whether the AC adapter is attached or not.

The included male-to-female USB-A cable allows you to connect the AC unit to the battery unit without the need to have them physically mated. This can be very handy in those situations where the AC outlet is not near you or if you want to use your Apple Watch in Nightstand Mode but don’t have an AC outlet on top of the nightstand.

Even without the instruction sheet, it is pretty easy to figure out how the wiTraveler Apple Watch Charger works.

When we first tried out the wiTraveler Apple Watch Charger, we thought it wasn’t working. It didn’t appear to be charging the watch. What we found was, you need to press the small button on the side to activate the charging process.

During a recent trip, we used the wiTraveler Apple Watch Charger on a nightstand in a hotel room and used the included USB cable to plug the AC power cube into an outlet built into a lamp that was also on the nightstand, so that worked out well. Had the outlet been further away, the provided cord, which is only a little more than 2 feet long, would not have reached. We think it makes sense to have a longer cord available either in addition to or instead of the provided cord. As a great companion to the wiTraveler Apple Watch Charger, you may want to consider something like the AmazonBasics USB 3.0- A-Male to A-Female – 6.5 Feet Extension Cable.

The instructions also said that to manually turn the charger off, remove the watch and wait 30 seconds. We actually didn’t find that to be the case. Even after several minutes of the charger sitting empty, the unit still seemed to be on and would start to immediately charge the watch if we placed it on the charger.

We found that manually holding in the side button for several seconds turned the charging function off but didn’t shut down the magnet. This isn’t good or bad and we only mention it to provide some guidance on what to expect from your use.

We also thought the addition of a standard USV outlet on the rear of the wiTraveler Apple Watch Charger battery unit was a nice added feature. While we couldn’t necessarily use this as our primary iPhone charger, it’s a convenient reserve battery in an emergency situation when you have no other access to recharge your phone.

Overall, we think the wiTraveler Apple Watch Charger is a great accessory for every Apple Watch owner on the go. With no need for extra cable or batteries, it provides the security of an AC powered Apple Watch charger combined with the portability of a battery charger but without the need to pack extra equipment.

Its compact design allows you to carry the entire wiTraveler Apple Watch Charger in your purse, laptop bag or backpack.

The clever design and the included USB cable allows you to use the AC power even when not attached to the charger itself although we would recommend getting a longer cable to provide more charging options.

While the unit only comes with the US style two-prong plug, the AC power unit supports 110 – 240V so you only need a converter plug to use the unit internationally.

Finally, the built in standard USB port of the back of the battery unit provide a great source of emergency power for your iPhone or other device.

The wiTraveler Apple Watch Charger is compatible with all models of the Apple Watch and works for both 38mm and 42mm sizes.

We would like to that the folks at wiWare for providing the wiTraveler Apple Watch Charger for our review.

How do you keep you Apple watch charged while on-the-go? Why not join the conversation by leaving a comment below.