Every once in a while, a product comes along that you never realized you wanted until you saw it. That is what happened to us when we tested the GoPlay Wireless Mic.

The GoPlay Wireless Mic comes packed in a small round cardboard container with a simulated woodgrain graphic on top, which matches the imitation woodgrain on the top on the GoPlay Mic.

In the container is the GoPlay Wireless Mic and the companion charging unit, a short (perhaps too short) USB to Micro-USB cable, an instruction booklet and a cloth pouch to carry the GoPlay Mic with you. 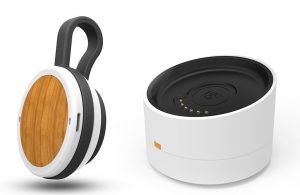 Attached to the GoPlay Wireless Mic is a magnetized rubber base that is used to secure the GoPlay Mic to your clothing or just about any magnetic surface. Under the rubber base is the On/Off button for the GoPlay Mic and some metal pins that align with corresponding pins on the charging unit.

The charging unit can connect to your computer or a power block to recharge which is indicated by a small blue LED on the front of the unit. If you connect the charging unit to a power source with the GoPlay Mic attached, both units will charge at the same time.

The GoPlay Wireless Mic is from a company called Yigo Space. Yigo Space (officially Yigo Space (Beijing) Science & Technology Co., Ltd.) is a smart device manufacture company headquartered in Beijing, China. It is a start-up which was founded at the end of 2015. They are focused on developing mobile audio and video technology and the GoPlay Mic appears to be their first product. They operate a web site for the GoPlay Mic and you can visit it here.

The instruction booklet provided with the GoPlay Mic is a bit confusing. We don’t know this for sure but being a Beijing based company, we suspect that English is a second language at best so we are giving them a bit of a pass on the clarity of the instructions.

Out of the box, the GoPlay Mic had about a 50% charge. Before doing anything, we decided to charge it fully so we plugged it into our MacBook Pro. When we checked back a couple of hours later, everything appeared to be fully charged so we don’t know exactly how long it took.

Before you can do anything with the GoPlay Mic, you need to download and install the free Go-Play app from the iTunes Store. Searching for the app was a bit tricky but within the instructions is a bar code that you can scan with any barcode scanning app and just follow the link.

Like the written instruction, the app seemed hard to follow. In fact, the app includes a short video on how to use the GoPlay and we had a hard time following it since the illustrations on the screen don’t seem to align with the actual user experience.

Fortunately, the use of the app is relatively straight-forward and we gained enough insight from the introduction video to figure out what we needed to do next.

The app is divided into four sections titled Look, Shoot, Edit and Me. The heavy lifting of the app is done in the Shoot section. 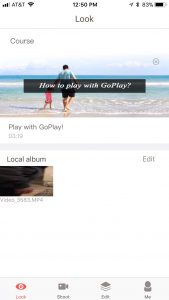 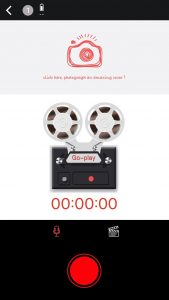 The Shoot screen gives you the choice to record just audio or a combination of audio and video using the GoPlay Mic and your iPhone camera. If you select video, you are given a further choice of 720p or 1080p video.

For audio only recording you can snap a photo with your iPhone to be used as a cover photo for the audio section.

According to Yigo, the GoPaly can record about 15 minutes of video but a full 2 hours of audio only recording.

The Me section of the app has much of what you would expect with details on the GoPlay Mic hardware, an option to send a note to the Yigo people and an option to select your preferred language option. Of course, we’re not exactly sure what the language section is controlling.

One of the options in the Me section is called Recharge and selecting it gives six options priced from $14.99 to $799.99. Selecting an amount changes a prefilled selection at the bottom of the screen from 3.0 hours to 6.0 hours but we had no idea what that refers to. There is a link to the “Recharge agreement” but selecting that didn’t help us since it was presented in Chinese. 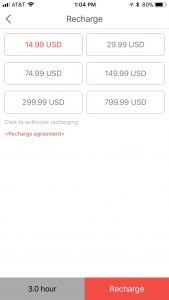 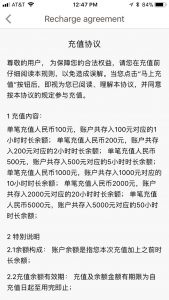 Having confirmed US English as our language in the app, we would have expected the Recharge agreement to display in that language. We tried to find a way to roughly translate the agreement but haven’t been successful.

Here is a brief video that illustrates what you can do with the GoPlay Mic. While we think the video is accurate as to the capabilities, we have to admit that we haven’t been able to figure out how some of these features are accessed or how they actually work.

Fortunately, what the GoPlay Mic and its app lack in documentation and polish, it makes up for in performance.

Once we got theGoPlay fully charged and connected to the app, which included setting up a GoPlay user account when prompted, we made a few actual tests and were impressed with the results.

The rubber covered magnetic clip easily attached to even thick clothing and stayed in place no matter how rough we got. We deliberately recorded video with our iPhone 7 in a noisy location with a loud TV in the background but had the wearer in the next room. We were surprised how well the background noise was eliminated and the speaker’s voice was still crystal clear. In doing an outdoor test, we reversed the GoPlay Mic so it was inside our jacket to block wind noise and got similar results.

Here is a video provided by GoPaly to demonstrate how well the GoPlay Mic works. While we acknowledge this video was provided by the manufacturer, we can confirm that in our testing, we got very similar results.

Near as we can tell, the video file remains on the iPhone while the audio track is stored on the GoPlay Wireless Mic. When you transfer the audio from the GoPlay Mic to the iPhone, the audio and video track is merged into a single file. Transferring the video or audio file from the GoPlay Wireless Mic to the iPhone was fairly easy once we realized that we have to manually go in to our Wi-Fi settings on the iPhone and select the GoPlay network. That starts the transfer and then the iPhone automatically switched back to the default network. In reading through the instructions again, we think this is a bit smoother in the Android world. The resulting merged file was excellent with no evidence this was done on two separate devices.

The app has a selection to edit the video but found the video editing function to be extremely limited. At best, all we could do was trim the start and end points of the video. There is also an option to join two video clips together.

We should also point out that the video files are quite large. A short 20-second video took a little over 20MB of storage. That means a 15-minute video would be almost 1GB in size.

Pure audio files are recorded in the .wav format and while Quicktime on the Mac can play a .wav file, we were disappointed that the GoPlay Mic didn’t use the more universally accepted mp3 format.

The audio file playback screen also has button to transcribe the audio but selecting it brought up a message that the file could not be transcribed because there was insufficient time remaining. This is just a guess on our part but we have a feeling we just figured out what those Recharge purchases are for.

We ran into one other problem that caused a fair amount of frustration.

During our testing we, understandably, ran down the battery level in the GoPlay Mic. When we tried to transfer an audio file from the GoPlay to the iPhone, we received a message that the Wi-Fi could not be connected because the GoPlay Mic was below 20%. We returned the GoPlay Mic to its charging base and let it recharge but was never able to complete the transfer. We kept getting the low battery notice and the GoPlay Wi-Fi selection was missing on our iPhone. We tried several things including closing down the app and restarting it and turning off the GoPlay Mic and turning it back on, none of which resolved the issue.

Through a fair amount of trial and error we finally found a way to refresh the connection between the GoPlay Mic and our iPhone and that finally removed the message and allowed up to transfer the audio file.

We think the idea of the GoPlay Wireless Mic is great. The sound quality and video recording was excellent and there are certainly a lot of applications we could see using it for. That said, it has the feel of a 1.0 device. We think the folk at Yigo would be well served to find a way to enhance the directions that come with the GoPlay Wireless Mic or put a well-written User Guide on line to assist new users.

We think the ability to transcribe an audio file can be very helpful but we don’t really have a way to know if the pricing listed in the app (assuming that’s what it is) is worth the money or not. The poorly written directions leave us to question how well the transcribed text would be.

In it’s simplest form, we think the ability to get crystal clear audio from a distance , alone or in connection with video, makes the GoPlay Wireless Mic worth the price.

In the end, we like the GoPlay Wireless Mic and think it does what it is designed to do well but be prepared to spend some time and frustration, figuring out how to use it.

We would like to thank the folks at 1Go for providing a GoPlay Wireless Mic for our testing.

The GoPlay Mic is available from Amazon and in the iPhone section of the Apple Tech Talk Marketplace.