CAUTION: THIS COMPANY APPEARS TO BE OUT OF BUSINESS AND NO LONGER SUPPORTING THEIR PRODUCTS.

Just about a year ago, we introduced you to the Olala iDisk, Model ID100, (read our review here.) That model came in both 32GB and 64GB models. While the ID100 is still a great option for many users, those with a larger iPhone or that want more storage capacity should check out the new Olala iDisk ID101.

In many ways, the Olala iDisk ID101 is identical to the earlier version we reviewed and for that reason, we won’t spend a lot of time repeating the same information. Instead, we’ll focus on how the two models differ and let you decide which you prefer.

Both models have a Lightning connector on one end and a USB 3.0 connector on the other but have very different layouts. 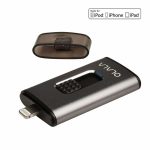 The Olala iDisk ID101 takes a different approach. Both the Lightning connector and the USB connector 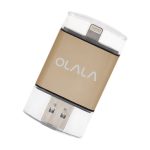 are exposed and fixed in place. There are no slides and nothing moves.

A molded plastic cover is provided for both ends and when installed, gives the Olala iDisk ID101 a nice profile and while a little wider than the ID100, it is still easy to carry in your pocket. That said, one of the concerns we had about the ID100 was that the plastic cap could easily be lost.   It helped that you could expose the USB connector without removing the plastic cap from the Lightning connector end. With the Olala iDisk ID101, you have to always remove at least one of the caps to use it. Because they are clear plastic they could easily be misplaced or overlooked. We would have liked to see some way to stack one cap onto the other as a way to store it when you needed to remove it.

The operation of the ID 100 and the Olala iDisk ID101 are identical. They use the same app and produce the same results. In our test of the Olala iDisk ID101, we copied about 4,500 photos from our iPhone 7 to the Olala iDisk ID101. The first 1,200 took 5:50 while the entire 1.96GB copy took a little under 9 minutes. While it would be difficult to find a particular photo in Finder since they all carried their original IMG_nnnn format, they were nicely organized in their appropriate folders. When using the iDiskme app, you still only have the original file name but can easily see a thumbnail of the photos, which are also organized in their respective folders. So, it would be much easier to locate the photo on your iPhone, write down or remember the number, and then find it on your computer.

Keep in mind that this is primarily a back-up device and a way to easily transfer data from you iPhone to your computer. We would expect that if you were using the Olala iDisk ID101 to off-load content from your iPhone, you planned to import it to Photos or transfer it to someone else’s computer so finding an individual file is probably not your main concern.

Videos were just as easy to copy but left us a little confused on the results.

The iDiskme app said we copied 30 videos from our iPhone. That was a subset of the 420 videos on our iPhone and the folder for those 30 videos measured 2.4GB in Finder. When we looked in the Videos folder, we found 2 other folders labeled Camera Roll and Videos and they contained the same 15 files. The files in each folder had the same quality and played equally well and were identical in size. We’re not sure why they were copied twice. We suspect this is more about the way Apple manages the video data and less to do with the Olala iDisk ID101.

One final note. There has been numerous comments that Olala iDisks do not work on iOS 11 due to an Apple bug when that software version was first released. We can confirm that we did all of our testing using iOS 11.4.1 and had no issues at all. Whatever problems may have existed appear to be fully resolved and you should have no issues using the iDisk or the app.

While Apple provides iTunes and iCloud as storage alternatives, for many people that is either not enough, or they have other needs, like sharing data with others or needing a way to back up your iPhone data when traveling or when your primary means of backup is not available. In those cases, it’s nice to have a handy alternative and the Olala iDisk line is an excellent choice.

Whether you like the original style of the ID100 or the newer, high capacity Olala iDisk ID101, you really can’t go wrong with either option. The free iDiskme app is easy to use and with no set-up required, you can be making your first backup in minutes.

Even if you do nothing more than adding an Olala iDisk to your regular backup routine, it is well worth the investment to protect your photos and videos, which for many people, is their most treasured digital possessions.

The Olala iDisk ID101 comes with a 12-month manufacturers warranty.

You can get more details about the Olala iDisk ID101 directly from the Olala website here.

We would like to thank our friends at Olala for providing the Olala iDisk ID101 for our testing and review.

How do you backup the data on your iPhone? Why not join the conversation and add a comment below.