CAUTION: THIS COMPANY APPEARS TO BE OUT OF BUSINESS AND NO LONGER SUPPORTING THEIR PRODUCTS.

Over the years, storage capacity for the iPhone and iPad has continued to increase. While it may be near impossible to find many people using an iPhone with 8GB of storage anymore, there are plenty of users with 16 and 32GB devices that aren’t ready to upgrade but are quickly running out of storage space. If that is your issue, or you are looking for a way to easily move and share content to or from your iPhone or iPad, you should check out the OLALA iDisk.

OLALA is a Hong Kong based group of passionate designers who aim to combine a superior user experience with the latest technologies. They design unique and simple peripherals for consumer electronics and mobile tech accessories, such as high-tech power bank, iPhone/iPad flash drive, USB flash drive and Lightning cables. 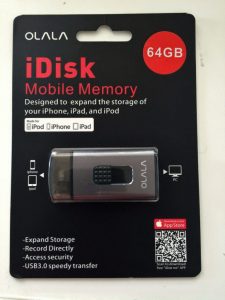 The OLALA iDisk (Model # ID100), is a 64GB (a 32GB model is also available), flash drive which comes packed on a cardboard card. There are no extra cables needed and nothing to assemble. In fact, there isn’t even an instruction sheets. But don’t be too quick to just tear into the packaging. On the lower right corner of the card is a QR code. Scanning the code with any QR code app brings you directly to the free iDisk me application in the App Store, and you’ll need that to use the iDisk on your iPhone or iPad.

It’s understandable that the (probably) more fragile lightning connector needs some form of cover or protection to avoid accidental breakage but we would have liked to see some way of having the plastic cap secured to the iDisk body to avoid losing it. As an alternative, you could store the lightning connector inside the iDisk and leave the USB 3.0 end exposed but that would be completely unprotected.

Once you remove the iDisk from the packaging and install the iDisk me application, you are ready to go. There is no set- 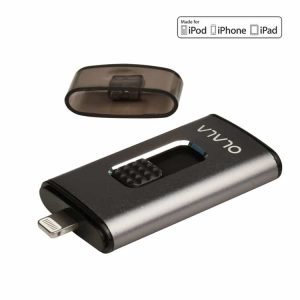 up required and no user accounts to create. The OLALA iDisk comes preformatted in the common Windows FAT32 format. We tend to reformat all of our external hard drives, including flash drives in the default HFS+ format used by MacOS but the iDisk only supports FAT32 and exFAT.

While we think everyone should use a Mac, we know not everyone does. And while one of the reasons to use the OLALA iDisk is to off load files from your overcrowded iPhone or iPad, it also is very handy if you need to transfer files to a laptop or desktop computer. Most of the files you will store on the iDisk are cross platform formats including, TXT, DOC, XLS, PDF, BMP, JPG, MP3 and MP4, you would be well served to have the iDisk available for use on a Mac or a PC. While FAT32 has a 4GB file size limitation, we did not have any files that came close to that size so we decided to keep the iDisk in the original FAT32 format. Many people advocate the exFAT file format for the ultimate cross platform availability. Since OS x and macOS support both, you can decide what is best for you. 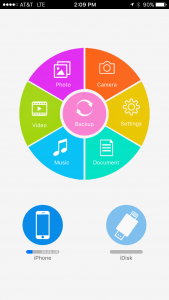 With the app loaded on our iPhone 7, we plugged in the OLALA iDisk and immediately got a message advising that the iDisk wants to connect to the application. Doing so brings you to the main screen of the iDisk me app.

The app is very straight forward. The main screen shows a multi-colored circle divided into six (6) section for Document, Music, Video, Photo Camera and Settings. The center of the circle is actually a seventh option that allows you to backup Pictures, Videos and Contacts with one button.

Below that are two icons to show the remaining space available on both your device as well as the iDisk drive. To use the drive, select the type of files you want to transfer to or from your device and follow the easy to understand prompts to complete the transfer process.

Depending on the options you choose, you can move or copy files between the internal storage and the iDisk flash drive. In those cases where you are moving the files, you are asked to confirm the deletion process and that only appears after the move is completed and successful.

While the Photo section connects to the photo library on your iPhone, the Camera option connects directly to your camera and lets you save your new photos directly to the iDisk me app, rather than saving them to your iPhone and transferring them later. This could be very handy if you need to take photos for someone else and don’t want to necessarily save them to your phone first.

One of the features we especially appreciate is the ability to create new folders on the iDisk drive on-the-fly. In our testing we came across several situations where we took a series of photos and wanted to categorize them on the iDisk based on subject matter, location, etc. Being able to do that throughout the day made transfer to our Mac much easier later on.

Included in the Settings section of the app is the iDisk User Manual. We found it to be well written and a nice reference to help you remember all of the things you can do with the iDisk. In addition to step-by-step instructions, they provide plenty of screen shots to help you.

Finally, if security is a concern, iDisk can be locked using either a manually entered password of Touch ID.

Using the iDisk on our Mac (or dare we say a PC) was also very easy. Plugging in the USB 3.0 connector of the iDisk mounts the drive like any other USB drive. For clarification purposes we changed the name of the drive from the default NO NAME to IDISK for easier identification. After that, we just opened the iDisk in Finder and treated it like any other attached drive.

We did have two minor complaints about the iDisk drive itself. First, we found that with the Caseology Skyfall case on our iPhone 7 (read our review here), we were unable to connect the iDisk to our phone because the lightning connector could not reach into the jack on the iPhone. That is as much the fault of the case as it is the iDisk but regardless, we had to remove the phone from the case any time we wanted to use it.

Also see:  How to Remove Browser Redirect Viruses From Macs

On the other end, we found that we couldn’t connect the USB end of the iDisk to our MacBook Pro if there was another cable connected in the USB port next to it. The profile of the iDisk covers the adjoining USB port so we either had to unplug the cable leading to our Time Machine hard drive or use a USB hub which provided a little extra room.

Neither of these issues are critical and we would put them in the category of an inconvenience rather than a problem. In the end, neither of these should be considered a reason not use buy the OLALA iDisk, since the overall benefits far outweigh these minor issues.

Overall we found the iDisk performance to be acceptable. Using the Backup function of the iDisk me app, we copied 387 contact records in under 15 seconds. We initially thought the backup had failed since it happened so fast but when we plugged the iDisk into our MacBook Pro and tried to do a Restore, OS X reported that there were 387 duplicate records to be imported.

Doing a backup of the Photo app on our iPhone 7 took slightly longer. The iDisk me app reported that it was backing up 3,864 photos and it took about 3 minutes 15 seconds to complete. Unlike the Contacts which appeared in the app as one large Contact file, the photos were all backed up into their original folders, including folders shared by others.

We think the app actually backed up a little under 3,000 photos. This is based on the fact that the dialog box displayed during the backup jumped directly from about 2,950 to Completed and two of our shared photo libraries did not transfer to the iDisk. We suspect this has something to do with the shared libraries rather than the iDisk or the app.

We have to admit, when we first heard about the OLALA iDisk, we were a bit skeptical about just how useful it would be given that we have plenty of space available on our 128GB iPhone 7. But after using it for a couple of weeks we found plenty of opportunities to back-up our iPhone content and we even used it to share a batch of photos with a fellow iPhone user after they installed a copy of the iDisk me app on their phone.

The OLALA iDisk should not be considered you’re only backup for your iPhone since data like iMessages, Apps and Settings can’t be backed up. Our guess is this is due more to Apple’s restrictions as opposed to a decision by OLALA. That said, we had never considered having a back-up of our contacts in a physical flash drive but now that we do, we think it’s a great idea.

The OLALA iDisk comes with a 12 month warranty and has an MSRP of $79.99 but is available at a deep discount from Amazon.

We would like to thank the folks at OLALA for providing us with an iDisk for our testing and review.