We were recently offered an opportunity to look at the new Roccat Khan Pro Gaming Headset. Admittedly, we haven’t spent a lot of time looking at game related hardware or software but we know many of our readers are big gaming fans and as we are always looking for interesting ways to use Apple products and accessories, we has an interesting idea.

We previously reviewed the Jabra Evolve 75 Wireless Headset (read our review here), and was impressed with its sound quality, flexible call controls and all-day battery life. For anyone in an office environment or if you need the mobility that comes with Bluetooth connectivity, the Jabra Evolve 75 is a solid choice. But for many people who work from home or in a setting that doesn’t require a wireless connection, the price tag of the Evolve 75 may be a show-stopper. So, we wondered, how well would a headset intended for gamers, work for ordinary phone calls.

In the box is the Roccat Khan Pro Gaming Headset, an adapter to convert the two 3.5mm plugs to a single 3.5mm plug and a user information pamphlet. That’s it. 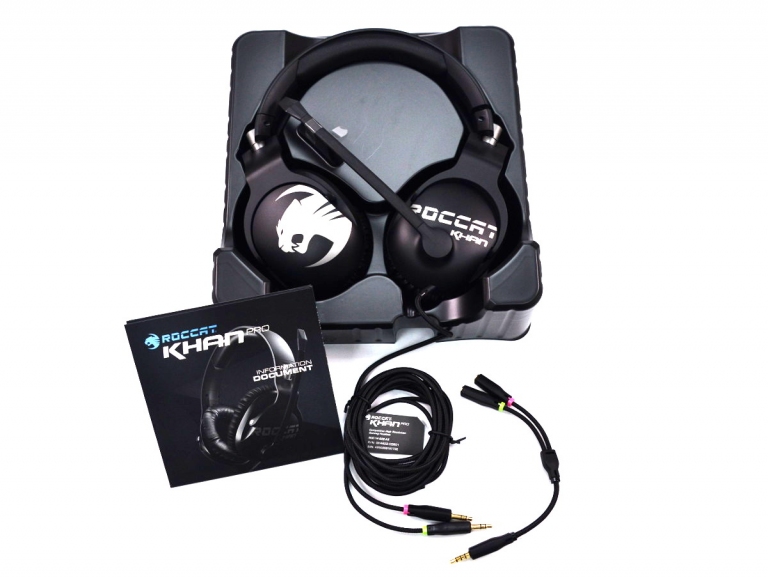 If it wasn’t for the microphone attached to the left side of the Roccat Khan Pro headset and the two 3.5mm plugs instead of a ¼” phone plug, we would have thought these were some headphone left over from the days when music was pressed onto vinyl rather than downloaded from the web, and people would sit on their floors with headphones on, listening to music for hours with no outside distractions.

The Roccat Khan Pro headset has a substantial look to it but are surprisingly light, weighing in at a mere 8.1 ounces. The heavy padding around the ear cups and inside the top band made the Roccat Khan Pro extremely comfortable and even after wearing them for several hours, we did not feel a need to take them off.

The side cups rotate to about 95 degrees and can be further adjusted by extending the stainless steel slides built into the headband. The cord is approximately 96 inches long which gave us more than enough freedom to move around our desk area without getting caught be a short cord. We also liked that the cord is a braided nylon rather than the usual rubbery plastic we are used to seeing. The cord terminates with two 3.5mm mini-phono plugs which are color coded to plug into the audio in and out of your computer or game console.

The only controls are a thumbwheel volume control built in to the rear of the left ear cup and muting the microphone by raising it to its upright position.

Connectivity – For most Mac users, having a separate plug for audio in and audio out doesn’t do much good since there is only a single audio in/out jack. The current Mac mini is the exception. The same is true for any iOS device. Fortunately, the Roccat Khan Pro includes an adapter that combines the two plugs into a single 3.5mm plug that worked perfectly in our iPhone SE and MacBook Pro. We needed the Apple supplied 3.5mm to Lightning Connector adapter to use the headset on our iPhone 7.

That said, we acknowledge that our testing to use this headset purely for telephone calls is not what it was really intended for but with Apple’s iOS devices now primarily using the Lightning Connector, we see a real opportunity if Roccat would make an adapter available that combines the two 3.5mm plugs to a single Lightning connector.

Sound Quality – We were pleasantly surprised at the audio quality we got from the Roccat Khan Pro headphones. Roccat describes their audio as High Resolution Sound and while there is not one single definition of “Hi-Res” audio, in terms of music it is describes as better than CD quality.

Whether it was using them for a phone call or listening to music, we found a near perfect blend of highs, mid-range and bass to make the sound crystal clear.

The Roccat Khan Pro also has passive noise cancellation. This kept outside noises to a minimum but we did experience a far amount of occlusion. For those not familiar with the term, occlusion occurs when the outer portion of the ear canal is blocked. This results in the speaker’s own voice being amplified. Many people describe it as feeling like they are talking into a tube or a barrel. Occlusion is most noticeable by people who wear certain styles of hearing aids but can also occur when you have a bad cold or your ears become clogged from swimming.

You may find the occlusion annoying as we did at first but over the course of using the headphones, we got used to it and it clearly did not have an impact on our overall use of the headphones.

But sound quality doesn’t end there. Roccat uses, what they call a “Real-Voice Mic”. People on the far end of our calls said that they had no trouble with the volume or clarity of our voice and remarked that they didn’t even realize we were using a headphone microphone until we told them.

Raising it up to its resting position can easily mute the microphone.

The folks at Roccat have produced a video that not only unboxes the Khan Pro headset but all of the audio is recorded directly from the Real-Voice Mic and you can check it out below.

Siri Integration – Unlike many of the Bluetooth headsets and ear buds we have reviewed, there is no Siri button or control on the Roccat Khan Pro. But that didn’t stop us from using Siri with the headset. Regardless of the microphones position (active or muted), a simple “Hey Siri” launched it on our iPhone and our call was dialed or the response to a question was heard through the headset.

While we would not go as far as to say the Roccat Khan Pro is Siri compatible, the fact that it is wired to your iPhone means you should never be too far away from the device to use the “Hey Siri” function.

Overall, we think the Roccat Khan Pro is a great-wired headset. Because it is only a wired device, it may not be a practical choice in today’s “open office” environment since most of that telephone hardware would not accept a simple 3.5mm connection. Also, that situation often requires a person to move to a private area to complete a call and having a physical connection to a laptop may not be the best solution.

Those situations aside, if you work in a home office or a small common office area, and mostly use your iPhone as your primary communication device, the features (and cost) of the Jabra Evolve 75 or a similar Bluetooth type headset may be more than you need. In that case, the Roccat Kan Pro headset may be a great alternative at almost 1/3 the price.

Admittedly, our testing is somewhat out of the mainstream use of this product since it is first and foremost, a gaming headset. That said, we think there is a real opportunity for the folks at Roccat to point out that this headset can serve multiple purposes as both a gaming headset and a wired headset for phone calls. While they may not want to include it in the box, having a dual 3.5mm to Lightning Connector adapter available as an option would be a nice touch and would eliminate the need for the second Apple supplied adapter.

The Roccat Khan Pro is available in three colors, black, gray and white and has an MSRP of $99.99. It is available on Amazon and in the Audio section of the Apple Tech Talk Marketplace.

We would like to thank the folks at Roccat for providing the Khan Pro Headphones for our review.

Are you a gamer that uses a headset? Have you ever used it with your iPhone to make phone calls? What do you think of that idea? Why not join the conversation and add your comments below.