We recently reviewed the Jabra Speak 710 (read our review here), and think it is one of the best accessories for making your iPhone into a true conference or high quality speaker phone.  But in today’s world of Open Plan office layouts and work-from-home arrangements, people have an increasing need to conduct more private telephone conversations.  For that, you should consider the Jabra Evolve 75 wireless headset. 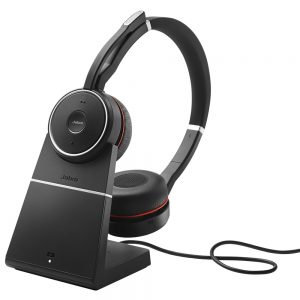 We have all heard that you can’t judge a book by its cover and that seems to hold true for many of the Jabra products we have reviewed.  From the outside, the rather plain brown cardboard box our Jabra Evolve 75 came packed in would imply this is a low end headset.  But spend a few minutes with the Jabra Evolve 75 and you’ll find the exact opposite.

In the box is the Evolve 75 headset, tucked neatly into its custom protective case.  Also in the case is a USB cord, used to charge the headset and the Jabra Link 370 USB Bluetooth® adapter.  Our Jabra Evolve 75 also included the optional desktop charging stand.

The headset is an on-the-ear style but has ample cushioning.   The headset measures 6.9 x 8.1 x 2 inches and weighs in at a mere 6.2 oz. which allows for long wearing time without becoming uncomfortable. The optional charging stand measures 4.3 x 5.6 x 3.8 inches and would be a nice compliment on any desktop.

The internal rechargeable battery can be fully charged in about 3 hours and is rated for 15 hours of talk time and up to 30 hours of standby time. 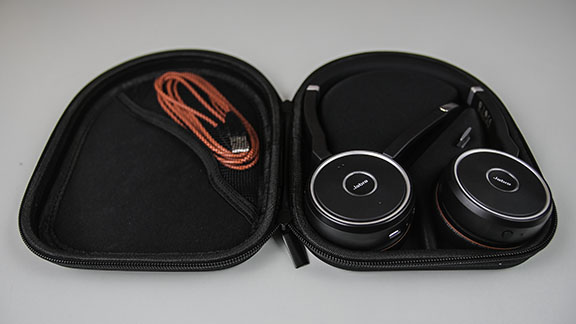 Keep in mind that this is not just a listening device but is intended to be used first and foremost for telephone conversations and the integrated medium-length, noise cancelling, unidirectional ECM microphone is mounted on the right earpiece but swings up out of the way when not in use.

Like the Jabra Speak 710, there was practically no effort required to get the Evolve 75 up and running.

To connect the Jabra Evolve 75 to an iPhone 7, you slide and hold the On/Off/Sync Bluetooth switch to the sync position for 3 seconds.  Voice guided instructions will walk you through the pairing instructions.

We found it a little awkward to locate and hold the sync switch while wearing the headset.  It took us a couple of tries before we finally got it but once we did, the pairing process was quick and easy.

Pairing to our MacBook Pro was just as easy using the included Jabra USB Bluetooth adapter.

The controls for the Jabra Evolve 75 take a little getting used to but after a couple of times using it, they should become almost second nature.

Most of the controls are on the right earpiece.  The center of the outer surface is a button that you press to answer and end calls and you can push the larger surface on the top or bottom to raise or lower the volume respectively.

Along the bottom edge you will find the On/Off/Sync switch, the Bluetooth LED indicator and the mini USB port to connect the USB charging cable.  The same port is used to mount the headset on the charging stand.  Finally, on the top of the right ear cup is a mute button.

The left side contains a button to turn on the Active Noise Cancellation (ANC), and the ANC LED indicator.

Similar to the right side button used to answer and end calls, the left side has a similar button which activates what Jabra calls a “Listen-in” feature.  This allows the wearer to hear the ambient sounds even while wearing the headset.  This can be very handy in an office environment when you may want (or need) to interact with colleagues but don’t want to keep taking off the headset to have a conversation.

Finally, on the outer edge of the center buttons (on both sides) is an LED ring which turns red when you are on a call.  This “Busylight” lets your co-workers know you are on a call and shouldn’t be disturbed. 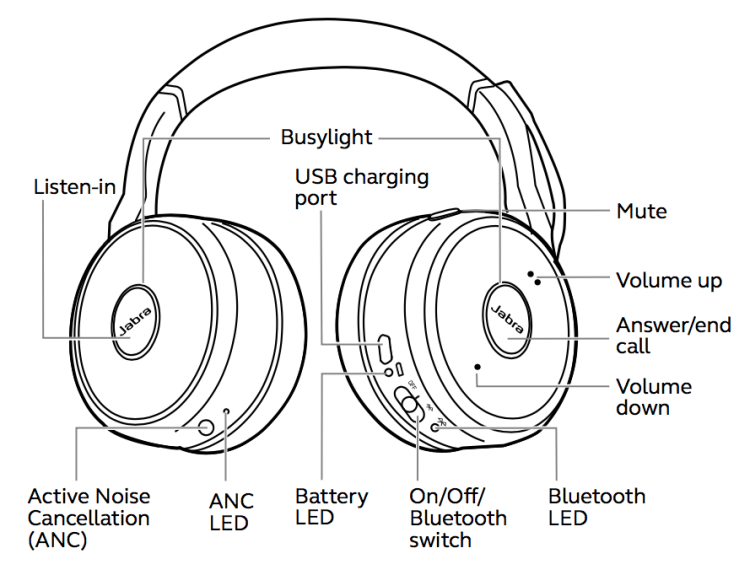 Jabra has done an excellent job of letting you control a host of functions with a minimum number of individual buttons.  The trade-off is having to remember all of the different combinations.  Most of the control is handled from the right earpiece.  Here are just some of the ways you can control the Jabra Evolve 75 headset (all from the right ear cup).

In fairness to Jabra, we’re not sure there is a better way to manage all of this and having everything controlled by one main button is certainly efficient. We would have liked to see a small wallet card in the box that can be used as a “cheat sheet” if needed, until you get used to the different options.

Overall, we found the sound quality of the Jabra Evolve 75 to be excellent.  Voices were crisp and clear and there was ample volume range so that we could hear even the softest of phone conversations.

The padded ear cups were quite comfortable and we don’t think users will have any issues if they need to wear The Jabra Evolve 75 for hours at a time.

One of our testers is a hearing aid wearer and said that the Jabra Evolve 75 did not pinch or interfere with the behind the ear style hearing aids at all.  In addition to being comfortable, there was no feedback or sound quality issues.  He did feel the sound was lacking in some of the higher frequencies but that appears to be due more to a personal hearing issue rather than anything to do with the Evolve 75.

Listening to music was generally acceptable. In communication mode the speaker is rated for 150Hz – 6.8kHz but expands to a full 20 Hz to 20kHz in music mode.  Even so, we found the music fidelity to be slightly less than what you might expect from a headset that is designed solely for music listening.  We consider the ability to listen to music an added benefit rather than a primary feature and in that context, we think the music sound quality is more than acceptable.

The Bluetooth connection was very stable and we were able to walk around the office with no drop-outs or interference and with a projected range of 100 ft. from the paired device, you should have no trouble continuing the conversation if you have to get up to grab something off the printer.

We found the Active Noise Cancellation worked well as did the Listen-in function in between calls.

Jabra Suite for Mac is free Mac software that enables Jabra USB audio devices to have Remote Call Control over the latest generation of Mac softphones.
This allows the user to:

directly from the Jabra audio device.

Jabra Suite for Mac provides compatibility between Jabra USB devices and the following softphones on the Mac OS platform:

The Jabra Evolve 75 is a top-of-the-line wireless headset.  The superior sound quality, flexible call control and all-day battery life makes for an easy choice but it does come at a price.

Alone, the Jabra Evolve has an MSRP of $279.00.  Add in the optional charging stand and the price jumps up to $329.00.  That tends to be at the high end of this product category.

There are certainly less expensive options for headsets but many of them tend to be wired options which is certainly less desirable, even if you don’t have to be mobile within your office.

Admittedly, we have not tested any competitor products in this category but we have tested enough Jabra products (read our reviews here), to say that they are well made and consistently produce superior sound quality.  We think Jabra makes a premium product that is worth the premium price.

If price is a concern, we encourage you to check out the full line of Jabra Evolve headsets available on the Jabra website.  They have a variety of Evolve headsets that are sure to meet everyone’s needs and budget.

While anyone who spends a lot of time on the phone would benefit from a headset like the Jabra Evolve 75, it seems targeted for use in an Open Plan office environment where you are faced with competing conversations at the same time.  Love it or hate it, the Open Plan office is here to stay.  By some estimates, 70% of today’s offices are at least partially an Open Plan layout.

That is a lot of people wearing a lot of headsets and Jabra is obviously serious about being a major provider.  The Jabra Evolve 75 is certified for use with Skype for Business, Avaya, Cisco and other major online voice call providers.

If you are a decision maker and need to deploy at least 50 headsets in your company, you may qualify for a free trial.  To find out more just go to the Jabra Evolve web site and click on the Free Trial button.

Even if you don’t qualify for the Free Trial or perhaps you just want a headset for yourself, we think the Jabra Evolve 75 wireless headset is worth serious consideration.

We would like to thank our friends at Jabra for providing the Jabra Evolve 75 wireless headset for our review.