The batteries in the latest iOS devices keep getting better and lasting longer.  But no matter how long they last it never seems to be long enough.  Whether you are searching for your next Pokemon or you are a road warrior with limited access to regular power, the Belkin Power Rockstar 10000 is the portable power pack that will save the day.

Even before you open the package you get the sense that this is a serious power pack.  The package has a front flap that opens to give you a summary of the features but also reveals the Power Rockstar under a clear plastic window.

You would think it is hard to get excited about a portable battery pack but the design of the Belkin Power Rockstar 10000 is actually attractive and we couldn’t wait to open it up.

Inside the box is the Power Rockstar 10000, wrapped in a very Apple-like plastic to protect the aluminum finish.  Our test unit was the gray model but it is also available in silver and gold.  All three are very attractive and we would not hesitate to keep it displayed on a desk or in an office so it is always readily available for use.

The top edge of the unit has two 2.4 amp (4.8 amps total) USB ports which can be used simultaneously to charge two devices at once.  There is also a Micro USB port which is used to charge the unit.  Next to the Micro-USB port is a button with four LEDs which provide the charged status of the Belkin Power Rockstar 10000. 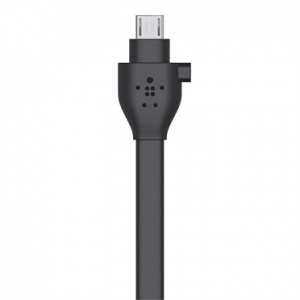 battery.  Of course, you can also flip the cord around, plug it into one of the standard USB ports and use it to charge a device that has a Micro-USB connection on it.

The standard USB end of the cord has a small tab and the cord slips easily in and out of its holder along the edge of the Power Rockstar.  Since the holder is magnetic, it holds the cord in place even if the power pack is turned upside down.

We’re sure that if you shake the unit hard enough you will dislodge the cord but that would have to be a pretty deliberate act.  Under normal use, we think the cord is very secure and really like that it is self-storing.

Also in the box is another cord which is a standard USB to a Lightning connector, which can be used to charge your iPhone, iPad or iPod touch.  It has the same magnetic grip used in the Micro-USB cord and either one fits in the provided space.

We were a little disappointed that you have to choose between the cords but based on the design of the Power Rockstar 10000, it’s pretty easy to see that finding a way to carry both cords at once would change the overall design of the unit.

The box says the Belkin Power Rockstar 10000 comes pre-charged and is ready for use but when we opened ours, and checked the status by pressing the button on the top, none of the LEDs lit up and it turned out the unit was completely dead. We used the included Micro-USB cord to connect the Power Rockstar 10000 to our MacBook and let it charge overnight.  The next morning, when we pressed the button again, all four LEDs lit up and we were ready to go.

In fact, with 10,000mAh of power you can recharge your iPhone four times or your iPad twice without the need to recharge the Power RockStar. While we haven’t used ours to fully recharge a dead iPhone, we did recharge our phone after a normal day’s use and got several recharges before we felt the need to recharge the Power Rickstar itself. We also used it to “top-off” our iPhone several times and we still had 4 LEDs showing on the power indicator after several uses.

We also wanted to see how dependable the Belkin Power Rockstar 10000 was over a long period of time so we let it sit on a shelf for a couple of weeks to see if there would be any phantom power drain. While our test was somewhat unscientific, we did still have 4 LEDs of power even after letting the unit sit unused for almost three weeks.

The dual 2.4 amp USB ports is very convenient if you carry multiple devices but is even more important if you and a travel companion both need to recharge at the same time.

Perhaps our favorite feature is the self storing cord.  Granted, you will have to make a decision on which cord to carry but that may depend largely on how you decide to use the Belkin Power Rockstar 10000.

In our case, we almost always have a regular Lightning cord with us so we keep the Micro-USB cord in the on-board holder so we can always recharge the battery if needed.

Other people may take the battery with them for short periods of time but know they will always be returning back to the home base where they can recharge and in that case, may want the Lightning cord in the holder.

There is certainly no right or wrong answer and it’s nice to have the option to switch back and forth.

At 5.7” each, they are a bit short and because of their design, it is difficult to turn the tips in different orientations.  As a result, you may find there are situations where the cord does not easily fit in one device or the other.

For other situations, like hotel rooms that never seem to have an electric outlet in a convenient location or airports with their power outlets up on charging station poles, you may find the included cords difficult to use.

We do not mean to imply this is a significant issue and would not recommend against the Belkin Power Rockstar 10000 because of it.  Rather, we point it out so you can be better prepared to make the most use of this portable power.

Overall, we would rather have these cords than not.

The Power RockStar 10000 comes with a 2-year warranty against manufacturer’s defects and is also protected by a Belkin Connected Equipment Warranty. If your device is damaged by an electrical charge while properly connected to the charger, Belkin will repair or replace the device up to a value of $2,500.  The Connected Equipment Warranty requires that you use Belkin cables, Apple OEM or other MFi approved cables and you will be asked to submit the battery pack, cable and damaged device for inspection as part of the warranty process.

The Belkin Power Rockstar 10000 is aptly named.  The combination of style, design and function makes this one of the nicest portable battery packs we have seen.  We love the magnetic cord holder as it is one less thing to carry.  While the cords are a little on the short side, we prefer that over always needing to remember to take a cord along, or worse, wrestle with wrapping it up around the battery pack.

You can drop the Power Rockstar in your bag or keep it in your desk drawer and know you are always ready to go.  Of course, the aluminum colored exterior makes this so attractive that you may prefer to leave on your desktop for others to admire.

If the Belkin Power Rockstar 10000 is a little more than you want or need, Belkin also offers the Power Rockstar 6600.  Similar in design to the Rockstar 10000, the Rockstar 6600 has a 6600 mAh battery and two 1.7 amp (3.4 amp total) USB ports that will recharge your iPhone three times.  It has the same magnetic cord holder design and comes with the same two cords but they are only 3.9” long.  In addition to the gray, silver and gold colors, the 6600 is also available in Rose Gold.

How do you use your portable power packs?  Why not joint the conversation by leaving a comment below.

If you liked this article, please consider sharing it with your friends.