The Netgear Orbi comes in a 2 or 3-unit configuration.  We tested the two-unit system which consists of a main router (RBR50) and a satellite unit (RBS50).  Also in the box are two AC power bricks, a 2 meter Ethernet cable and a Quick Start Guide. 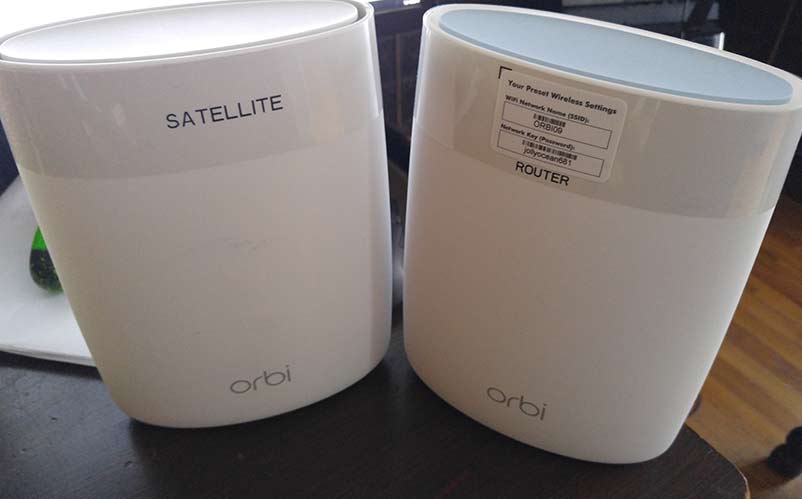 Everything about the Orbi system is big.  The router and satellite units each measure 6.7” x 3.1” x 8.9” and weigh 1.96 lbs.  The AC power supplies are also very big and while they are configured to work well in a wall outlet, the design covered two additional outlets when we plugged it into our power strip.

The Orbi system has simultaneous Tri-Band Wi-Fi and support 802.11b/g/n on the 2.4GHz band and 801.11a/n/ac on the 5 GHz band.  There is a second 5 GHz band that is used as a backchannel to allow the router to communicate with the satellite unit.  The router also has six (6)  high-performance antennas with high-Power amplifiers.

The Orbi units do not have the usual LED indicators seen on most other routers we have tested.  Instead, the top edge of both the router and satellite have a multi-colored LED ring that provides the status of the Orbi units.  These are used primarily for the setup of the system.

On the back of each unit are four (4) Gigabit Ethernet ports.  The router unit uses one of those posts for the WAN connection to your modem while the satellite unit leaves all four ports available for LAN connections.

Also on the back of each unit is the power connection, an On/Off button, a USB port for connecting a printer or external hard drive and a Sync. Button.

The Orbi system can be setup from either the desktop or the Netgear mobile app.  We elected to use the desktop and went through the following steps.

To set up your Orbi router and satellite:

This may seem like a lot but in reality, it was extremely easy to set up and we had no issues getting the system connected to the Internet which took all of about ten minutes.

Here is a video which illustrates the Orbi set-up process.

Whether you choose to use your Mac or iOS device, configuration is completed from the www.orbilogin.com web site.  To get the system up and running you can follow the directions on the screen and the system will basically configure itself.  We found the Netgear Orbi system to be one of the easiest set-ups we have seen and even an inexperienced user should have no trouble getting on line.

Once the system is up and running the browser based administration screen gives you full control over the entire system. 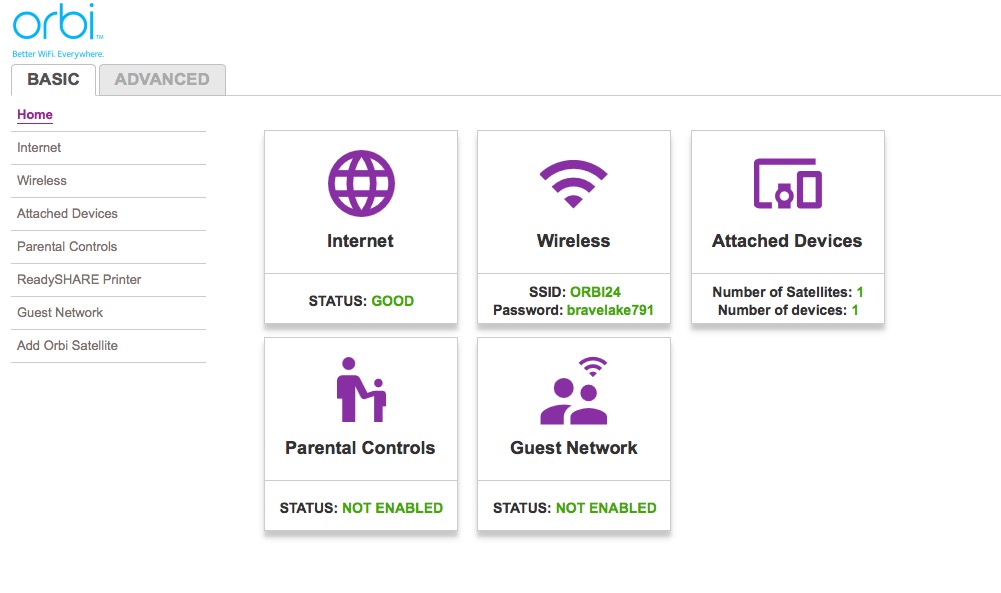 The “Basic” screen gives you an immediate overview of your system’s status, the SSID and password and which functions are enabled.

For those seeking more granular control, the “Advanced” screen give much more detail on the system’s status and on your ability to control it. 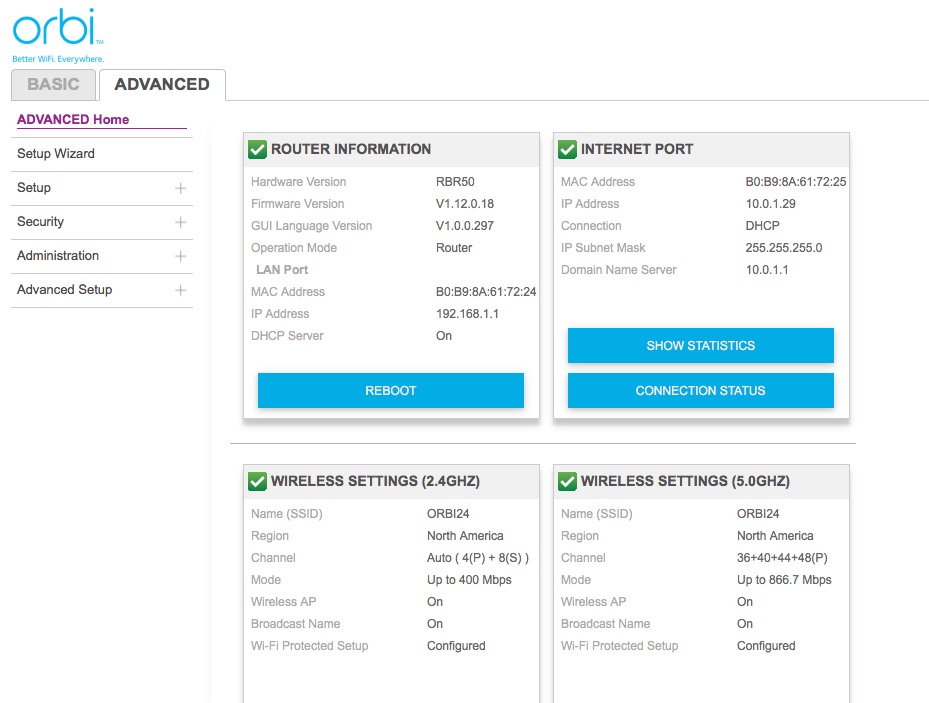 While most users will probably be satisfied with the Basic console and will need little extra details, Netgear does provide a comprehensive User Manual for those users wanting additional information on how everything works. You can see and download a copy of the User Manual here.

The main reason anyone uses a router is for fast Wi-Fi service and for that, the Netgear Orbi does not disappoint.

Our primary network has been an Airport Extreme Base Station (802.11ac) with several Airport Express units strategically located to extend our network and stream iTunes over Airplay.  Internet service is provided using a Cisco DOCSIS 3.0 modem with speeds of 150Mbps guaranteed.

In general, we have found this level of service meets our needs with ample bandwidth for all of our communication and data needs.

We set-up the Netgear Orbi system to use the same 150Mbps service so we could get a side-by-side comparison between the two networks.

To establish a baseline, we first did a speed test using our original Airport Extreme 2.4 GHz network and received the following results.

We then switched to the Airport Extreme 5 GHz network and received significantly better results.

We then switched to the Netgear Orbi network and was surprised to see that it even beat the Airport 5 GHz network.

Of course all of these speed tests were conducted on our MacBook Pro which is located right next to both the Airport Extreme and the Netgear Orbi so we were not all that surprised to see these results.

But what makes the Orbi system special is its ability to provide superior speeds throughout your home or office by using the satellite unit to rebroadcast the signal without losing significant performance so our next tests were conducted one floor above the main router units where we had the Orbi satellite and several Airport Express units.

This time we ran the speed tests using our iPhone 7 and the results were a real eye opener.

One of the things that affects network speed is the distance from your local device to the server that it needs to contact for data.  In many cases the data stream bounces across multiple sites before it reaches its final destination.  When we do speed tests, we try to use the same servers so we get consistent results.

For our first test, we used a server that was relatively close to our testing location and only used the Airport 5GHz network.  That resulted in a Download speed of 53.23 Mbps and an Upload speed of 11.64 Mbps.  We were disappointed in the Airport networks performance considering there were three Airport Express units on that level of the building.

Next, we tried the same test on the Netgear Orbi network.  We stayed in the same physical location but the closest Orbi unit was the satellite which was a fair distance away with multiple walls in the way.  We also changed our test server to one that was about 100 miles away.

There’s no question the Netgear Orbi system provides much better performance in our tests.

We also found the Orbi to be extremely stable.  We operated the Orbi network for several weeks without a drop in service or signal quality.  We also used the Orbi network to power our Drobo 5N2 (read our review here), and had no issues connecting to our network remotely.

While the performance we got from the Netgear Orbi system was impressive you need to be sure its network design meets your needs. 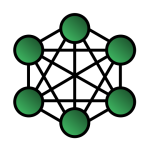 Mesh web technology is becoming very popular and we have looked at several mesh web systems like eero and Linksys Velop.  In a mesh web, all the nodes in the system communicate with each other. In that case, you could put the main node on the first level of a home, put another node on the second floor and the third node on the third floor.

In a mesh topology, the Wi-Fi signal could pass from node 1 to node 2 and then node 2 would pass it on to node 3.  Another thing about the mesh web systems we have tested is that all of the nodes are identical and any node can become the master by connecting it to your router.

The Netgear Orbi system is not a mesh web.  Rather, it operates in what is known as a Star or a Hub and Spoke system.  The 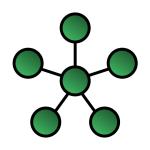 Orbi nodes are dedicated for their specific role.  The router must always be connected to your modem and the satellite, which is clearly marked as such, will only communicate with the router.

To be clear, we are not suggesting that one design is better than the other.  There are pros and cons to each and the important thing is to understand how they work and select the system that works best for you.

It’s hard to argue with the speed test results we got.  The Netgear Orbi system is a top performer and provided consistent results during our entire test period.

Everything about the Netgear Orbi system is big, from the packaging to the hardware nodes and the power adapters.  The other big thing is the price.

A basic Orbi system consisting of the router and 1 satellite has an MSRP of $399.99, and should provide coverage for up to a 5,000-sq. ft. area.  If you need more coverage, there is a three node set available, priced at about $559.99.  You can also start out with the basic set and add an extra satellite later on if you need it.

Netgear also recently introduced a smaller Orbi satellite unit that plugs directly into a standard AC outlet. It covers a slightly smaller area (about 1,500-sq. ft.) but is more reasonably prices at $149.99.

All of the Orbi devices are available from Amazon and other fine retailers.

We would like to thanks our friends at Netgear for providing an Orbi Wi-Fi system for our review.