We recently reviewed the Jabra Speak 710 Conference Speaker (read our review here), and was surprised to find how much it enhanced the speakerphone experience. We recently had a chance to test a similar unit called the OfficeCore M1 Conference Speaker from eMeet and found that while less expensive, it is no less of a performer.

In the box is the OfficeCore M1 conference speaker, a semi-hard shell carry case, a USB-A to Micro USB cable, a warranty card and a User Manual. 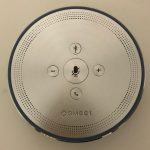 Our M1 unit itself is a bright silver finish with a brushed aluminum around the side, and a rubberized base to provide a non-slip surface. Also in the box is a molded semi-hard shell carry-case, a USB-A to Micro USB cable, a User Guide and a Warranty booklet.

At 4.3 inches in diameter and a mere 1.1 inches high, the OfficeCore M1 takes a minimal amount of space of your desktop and the bright silver finish will go with pretty much any décor.

On the top of the OfficeCore M1 are four (4) buttons to control volume, up and down, Bluetooth connection, Call End and Mute. The outer edge of the top of the unit contains multi-colored LEDs that provide visual feedback during the unit’s operation.

On the side of the OfficeCore M1 is the power button and two USB connections, one USB-A and one Micro USB. Both are protected by a rubber cover that opens to one side for easy access. 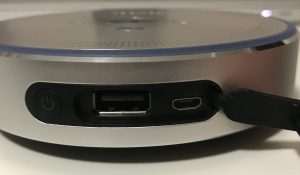 The Micro USB in the M1 is used to charge the unit. This can be done by plugging it into a USB port on your Mac or using a 5V AC adapter. The USB-A port lets you recharge your iPhone from the battery power of the M1. This is a nice touch and while we would not consider the M1 as a back-up power supply or external battery, it’s a great resource in an emergency.

Getting the OfficeCore M1 conference speaker set up was effortless. Out of the box it had about a 50% which could probably get you through an entire day of calls.

Pressing the power button brings the M1 to life and the LED ring around the outer edge glows blue. A voice welcomes you to the M1 and reminds you to download an app from the appropriate App store. As of our review, the Android app was released but the iOS app was still being worked on so we couldn’t test that.

To connect the M1 with our iPhone 7 only required us to open the Bluetooth panel in the iPhone settings. The eMeet M1 was listed as an available device. We selected it and the connection was made. There were no PINS to enter and the entire process took about a minute.

The multi-colored LED ring serves several purposed and we found it to be straightforward. For example, pressing the Mute button on the top of the speaker tuned the LED solid red. Pressing the power button quickly when the unit is on provides the battery level as indicated by how much of the ring lights green. Volume is indicated by the ring turning blue around the edge of the M1 as the volume increases. Lowering the volume moves the blue in a counter-clockwise direction.

Finally, the M1 has a total of seven (7) microphones with six (6) of them being positioned around the outer edge of the speaker. If multiple people are around the speaker, the outer LED ring will light blue for the person who is speaking. This gives a nice confirmation that the person should be able to be heard on the far end of the call.

Connecting the M1 to our MacBook Pro was just as easy. After connecting the M1 with the provided (or any) Micro-USB to USB-A cable makes an immediate connection. We did have to go into the Sounds panel within System Preferences and select the eMeet M1 listed as an audio source, but that is not unique to the M1.

We also wondered what would happen if we tried to connect the OfficeCore M1 to our MacBook Pro as a Bluetooth device. This turned out to be just as easy as connecting it to our iPhone. We turn on the M1 and opened the Bluetooth panel in System Preferences was listed. We clicked on the Pair button and in a few seconds, the M1 was connected to our MacBook Pro and was the active sound device.

Once connected, we were able to steam music from iTunes, and pass all other audio through the M1.

Clicking Remove in the Bluetooth panel immediately dropped the Bluetooth connection and disconnected the speaker. It was effortless and would be another option for conducting an impromptu meeting without the need to set-up any hardware.

We made several calls using the eMeet OfficeCore M1 Conference Speaker and were very pleased with the results. There was more than enough volume available from the speaker and we never had to raise it to the maximum level. Even in a large conference room, we doubt people would have any trouble hearing the voices on the far end of the conversation.

We checked in with the parties we were speaking to and they al said are voices were clear and they had no trouble hearing us. We even made a couple of multi-party conference calls from our iPhone 7 and all of the parties came through clearly.

You can even use the M1 to ask Siri a question. Pressing the Answer/End Call button opens Siri on the iPhone and you can ask your question through the M1. If your iPhone is in range, you can also say “Hey Siri” and the M1 will handle the connection. Unfortunately, it does not work the other way. If the iPhone is not within the sound of your voice, the M1 will not activate it.

Music playback was good if you keep in mind that the M1 is first and foremost, a telephone speaker. If you have this sitting on your desk, the fidelity is far superior to the speakers you would find in your laptop. That said, we felt the music was missing some of the bass and did not have the fullness you would get from speakers designed for the full fidelity you would get from something like the Bose Companion II speakers (read our review here.) But for occasional listening or for perhaps, showing a video or other audio that might be contained in a PowerPoint presentation, the OfficeCore M1 does an excellent job.

Finally, as we mentioned above, when you turn on the M1 it reminds you to download the app from the App Store. Although the iOS app is not yet available, we were told that the Android version is but our search in the Google Play store did not come up with anything. It is our understanding that the app has something to do with transcription and translation of calls, which would be very interesting. We’ll let you know if we find out more.

Here are some of the key comparisons between the eMeet OfficeCore M1 Conference Speaker and the Jarbra Speak 710.

We were impressed with the eMeet OfficeCore M1 Conference speaker. The small size makes it easy to slip into a bag and take it anywhere. We don’t know if the Bluetooth connection to our MacBook Pro without the need for an extra dongle was a nice surprise and could come in very handy.

The sound quality for music was a bit lacking but the sound quality for our phone calls was excellent with no echo or crosstalk. The LED rink on the outer edge of the M1 is very useful and we like that it lights up to show which of the six outer microphones is picking up the sound.

We would have liked to see what the companion app does but we have to respect any company that would rather delay release of a feature, than put it out before it is ready.

The OfficeCore M1 comes with a one-year manufacturer’s warranty and has an MSRP of $259.00 but is available for a significant discount from Amazon.

* Please note, our evaluation unit was silver but the model available from Amazon is listed as black.

We would like to thank the folks at eMeet for providing the OfficeCore M1 Speaker for our review.