We’ve looked at a lot of routers from many of the major manufacturers (read our reviews here), and today we’re looking at the Linksys WRT1900ACS.

We at Apple Tech Talk are no strangers to Linksys routers.  From the earliest days, Linksys has been a mainstay in the home networking arena.  In fact, our first routers were made by Linksys. So it was a bit of a walk down memory lane when we opened the box to find a familiar blue front panel on the Linksys WRT1900ACS.

The style of the original Linksys router was distinctive, and we feel, it has the same visual appeal today.  The Linksys WRT1900ACS is an upgrade from the original WRT1900AC router released in 2014.  From the outside, they look identical but there are some distinct differences inside.  Here is a brief comparison.

The router is a dual-band 802.11ac device and is backward compatible to the older 802.11 protocols.  It is rated for speeds up to 600 Mbps on the 2.4 Ghz band and 1300 Mbps on the 5 Ghz band.  Linksys recommends this unit for “very large homes”.  It supports 64/128-bit WEP, WPA2 Personal, WPA2 Enterprise encryption and can operate as a wireless router, access point, wired bridge or wireless bridge.

The unit is certified for Mac OS 10.X or higher and requires Safari 5, Firefox 8 or Google Chrome.

In the box is the Linksys WRT1900ACS router, four (4) detachable high performance antennas, an AC power supply, a flat Ethernet cable and a Quick Start Guide which contains a CD with product documentation on it.

If you have a newer Mac laptop which doesn’t have a CD drive you can download a copy of the 165 page, multi-language manual from the Linksys site, here.  The manual is extremely detailed and if you don’t use the CD version, we would recommend downloading the pdf version and keeping it handy for future reference.

The rear of the router has all of the usual connections and then some. 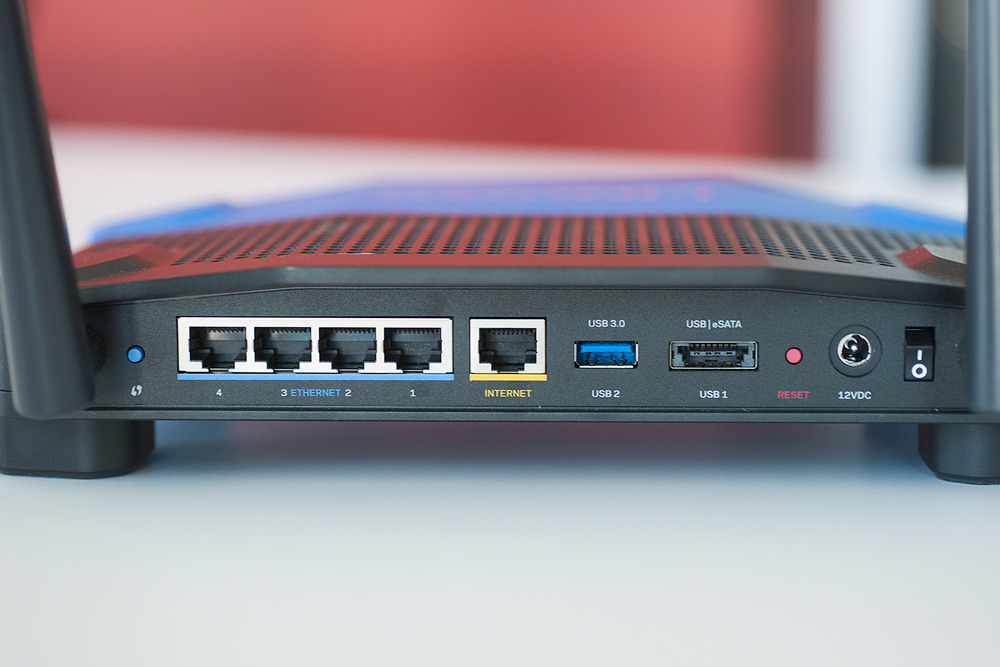 Starting from the left side there is a WPS button, four (4) 1 gigabit LAN ports, one (1) 1 gigabit WAN port, a USB 3.0 connection, a combination USB 2.0/eSATA port, a router reset button, the 12VDC power connection and an On/Off power switch. The USB ports support external hard drives that can be attached for network data sharing.  This may be the only router we have looked at that has an eSATA connection.

Unlike the Linksys Max-Stream 1900AC router we previously reviewed (read our review here), which took a minimalist approach to LED indicators, the front panel of the Linksys WRT1900ACS has all of the usual LED indicators to monitor the router’s activity.

The Linksys WRT1900ACS router can be wall mounted and instructions, as well as a mounting template are contained in the User Guide.

The Quick Start Guide included with the WRT1900ACS is little more than a folded over CD holder with some very basic steps, but we found that was all we needed.  The set-up was quick and easy.  You connect the router to an AC power supple, connect your modem to the WAN port on the back of the router and power it on.

Once the router has started, you need to remember to select the default SSID you open a web browser and go to: www.linksyssmartwifi.com. From the main screen you are offered to use the Smart Wi-Fi Set-up process or configure the router manually.  Unless you have very specific configuration requirements, we recommend you do the automated setup.

If you are setting up your network for the first time and want to use the default SSID and password provided in the Quick Start Guide, there really isn’t much to do as the Smart Wi-Fi software takes care of just about everything.  The software will prompt you when to power down and restart your modem.

As we have done for all of our other reviews, our goal was to recreate our existing network to see how well the existing network devices connected.  Other than entering our existing SSID and password, the Linksys Smart W-Fi software took care of the rest.  When the set-up was completed, we merely selected our usual Network from the Airport drop-down list on our Mac menu bar and we were back on line.

The Linksys web site has a nice support page describing the set-up process in greater detail and you can view that page here.

Linksys has also produced a video that gives a good overview of the Smart Wi-Fi software for both the Mac and iOS device and you can see it below.

First and foremost, the most important aspect of any router is how well it serves up wireless service in your home or office and the Linksys WRT1900AC did not disappoint.  We got strong signals in pretty much every corner of our test area which spanned about 2,300 square feet across two floors.

The Linksys WRT1900ACS has a built in speed test function and we recorded speeds of 79.34 Mbps down and 21.16 Mbps up which are comparable to many of the other routers we have tested.  We also ran a test on our iPhone 5s using the Ookla Speedtest app.  Those results were markedly lower at 20.73 Mbps down and 11.48 Mbps up. In spite of those seemingly lower numbers, it did not feel like our service on the iPhone was significantly different from other routers we have tested. App upgrades, downloaded from the iOS App Store, surfing the net on Safari and other usual functions all seemed to work as well as any other rouetr

At least some of the wireless devices on our network reestablished connections to the new network with no intervention on our part.  The MacBook Pros, MacBook Air, iPhones, iPad and HP6700 Premium printer all connected seamlessly without even needing to reselect the SSID from the list. But that’s as far as we got.

If you have been following our other router reviews, you’ll know that we were not surprised when our Brother HL-2270DW laser printer did not connect but that has nothing to do with the router.  What did surprise us was that our Belkin WeMo switch (Belkin is the parent of Linksys) did not reconnect to the network nor did our three (3) Airport Express (g) routers we use to stream music.  These devices have generally been very easy to connect and in fact, the only other router that we had a problem with was the Linksys Max-Stream 1900AC. 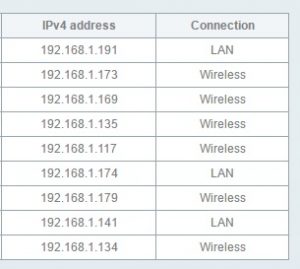 On some level this probably doesn’t matter as long as everything works but it could be confusing to someone trying to troubleshoot a connection problem in an environment mixed with wired and wireless devices.

The Linksys Smart Wi-Fi software is one of the most comprehensive router management systems we have seen.  It is extremely detailed and powerful but Linksys has done a good job making the screens informative but easy to understand.  Granted, for some, this level of detail will leave them confused but the User Guide does provide extra detail which will be helpful.  Here are just some of the controls you have for the Linksys WRT1900ACS router.

There are many functions and setting available through your web browser.  The iOS app does not offer all of this detail and is really designed more to provide the ability to monitor the condition of your network when you are remote.  That can be a real benefit of you are the family’s Help Desk and need to confirm the router is on-line when you’re not where the router is.

This is the first router we have reviewed that had complementary items available to improve or expand your Wi-Fi experience so we thought we would share them with you. 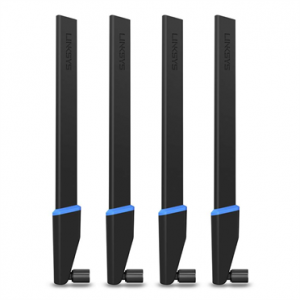 While we found the included antennas provided excellent reception throughout our entire test area, some people may find they have issues.  Linksys offers Hi-Gain antennas (Model # WRT004ANT) to replace the standard antennas.  Linksys says that these antennas are intended to improve performance on a single level so if you are trying to address an issue on a different floor of your home, you would probably be better served trying a ranger extender.  Also, be warned, these antennas are just over 11 inches in length.  That is more than twice the length of the standard antennas so check for any height restrictions in the area where you keep your router.  The antennas come in a package of four and have an MSRP of $99.00 but are available with a deep discount from Amazon.

The main focus of the routers we have looked at is wireless access. But there are still many situations that require not only 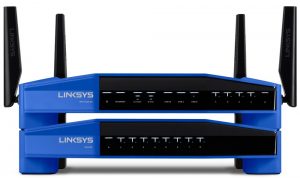 wireless connection but also the ability to manage wired Ethernet devices.  Most routers include 4 – 6 Ethernet ports on the router but if you need more, you will need to add a network switch into the mix. That tends to not only add a lot of exposed wires but also requires a lot of extra shelf space. Linksys has addressed this by offering an Ethernet Switch that not only matches the design of the router, but allows you to stack them.  The Linksys 8-Port Ethernet Switch (Model #: SE4008) is the perfect companion to the Linksys WRT1900ACS switch and gives the convenience of a rack mounted system, without the rack. The Linksys SE4008 has an MSRP of $69.099 but is also available at a deep discount from Amazon.

The Linksys WRT1900ACS is a great offering from a company that practically invented the home router industry.  We love the fact that the design takes us back to the early days of our first Linksys router. But don’t judge a book (or a router) by its cover.  This is definitely not yesterday’s hardware.

This router offers all of the features and performance you would expect from a top-of-the-line product.  The super easy set-up and the polished and comprehensive Smart Wi-Fi management tools makes for easy wireless management. Some minor connectivity issues aside, we were very satisfied with the  overall coverage and performance we got. For those wanting a router in a slightly more complicated mixed wired and wireless environment, the matching SE4008 Ethernet switch make a perfect companion to what is already a great product.

The Linksys WRT1900ACS router has an MSRP of $249.99 but is available at a deep discount from Amazon, along with the antenna and Ethernet switch add-ons.

We wish to thank the folks at Linksys for providing a WRT1900ACS router for our evaluation.