Never resting on their prior accomplishments, the folks at Netgear have been hard at work making more improvements to the ReadyNAS line.

In late September 2016, Netgear released ReadyNAS OS 6.6 which is available for both ARM and X86 based systems. Here are the release notes provided by Netgear.

We have been testing the OS 6.6 update for several weeks and find it to be extremely stable and we have not experienced any operating issues.  It should be noted that devices updated with 6.6.0 firmware should not be downgraded to earlier firmware versions.

Before we talk about how ReadyDR, which is a major new feature in the OS 6.6 release, let’s review what ReadyNAS Snapshots are.

The ReadyNAS OS 6 storage system automatically protects shared folders and LUNs by taking snapshots. Snapshots contain references to data on a shared folder and record changes to the data each time a snapshot is taken. In addition to the automatic snapshots, you can create a manual snapshot at any time.

By taking an hourly or daily Snapshot of the folder, the ReadyNAS will allow you to go back and recover an older version of a file or one that has already been deleted from the system.  In some respects, it’s like Time Machine for your network.

For a quick overview of the Snapshot system, take a look at Netgear’s video below.

ReadyNAS uses Smart Snapshot Management to reduce the number of automatic (continuous) snapshots per shared folder or LUN. Every hour, this feature automatically deletes older hourly, daily, and weekly snapshots according to the following rules:

The Smart Snapshot Management feature does not delete manual snapshots.

To our knowledge, Netgear is the only company that offers the Snapshot feature in the NAS systems.

For more information on Snapshots, check out the Netgear Support page here.

ReadyDR is an alternative way to backup data on your ReadyNAS device.

A ReadyNAS backup makes a copy of files.  A file backup is a copy of the file that exists at the time of the backup. The backup contains no history of the file.

You set up ReadyDR by creating a “key” file from the unit that stores your Snaphot folders.  You then import that key into the ReadyDR section on the ReadyNAS that you want to store the Snapshots on.   The ReadyDR Snapshots compliment the Backups of your Shares.  In the event of a catastrophic loss of your primary ReadyNAS, you could use the last backup and the ReadyDR of the Snapsots to recover all of your data. If you want to learn more about how to set up a backup program, read our article on 3-2-1- Backups here.

We tested ReadyDR using our ReadyNAS 526X and a smaller ReadyNAS 314.  Set-up of the ReadyDR process is a bit detailed but the instructions provided by Netgear were well written and easy to follow and we had no trouble getting it set up in just a few minutes.  We don’t think anyone would have a problem getting the ReadyDR process set up, even if they are not highly technical, and once set up, the ReadyDR process took care of itself.  For the first couple of days after we set up ReadyDR, we checked the ReadyDR folders to ensure the backup data was there.  After that, we let the systems take care of themselves.

The ReadyNAS OS also makes log entries on both the host and target ReadyNAS units when the ReadyDR process runs.  A quick review of the log files validates that the process completed successfully, or not.

In one case, we were switching out a router on our network and while it looked like the ReadyNAS servers were on line and functioning properly, we got an automatic message from the server that the ReadyDR function had failed overnight.  That led us to discover that the servers were off line from the ReadyCloud system which we immediately fixed.  Had we not received the error message (as part of our daily system messages), we may not have discovered the issue for awile.

ReadyDR is only available on X86 systems, so you would need a second X86 based ReadyNAS to hold the ReadyDR share. That may present some cost concerns for home users but is almost a necessity if you are using your ReadyNAS for business purposes.  In fact, we can think of several situations where it makes sense to consider buying two smaller ReadyNAS units, instead of one big one and letting one serve act as backup for the other, keeping them in separate areas of your office.  You may also have a need for two network, in which case the two ReadyNAS units can back up each other for both files and ReadyDR purposes. 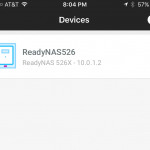 Probably the biggest news is the introduction of the Insight app for iOS and Android.  This app allows you to monitor and manage many of the administrative tasks from your iPhone, which you would normally have to do from your desktop and a browser.

The Insight app is currently in public beta so installation of the app on your iPhone would require a couple of extra steps that will not be needed once the app is released to the general public via the App Store.

When you first start the app it presents you with a listing of all of the ReadyNAS units assigned to your account.  You even have the ability to add a new ReadyNAS unit directly from the main screen.  You can then select the specific server you are interested in and drill down to get more specific details.

The main screen provides a nice graphical overview of the server’s health and activity including firmware version, temperature 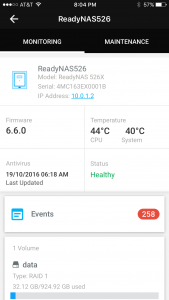 of the CPU and overall system, the latest anti-virus update, the most recent log messages and an overview of the volume usage.

The insight app is not just for monitoring since it does provide options to actively manage certain items like, changing the server name, checking and updating the firmware, rebooting or shutting down the system and changing the password.

There is still more granular detail available and you can even examine the various hard drives that make up the volume on the server. 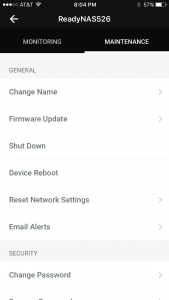 While some of these tasks may be more useful than others (how often will you change the server name?), for the administrator that may not always be at his or her desk, the Insight app gives a nice way to keep an eye on things without being tied to a browser.

It is not our intention to cover every possible task the Insight app covers nor are we going to show every screen in the app but the ones displayed here should give you a good idea of what this app can do.

But, there is one more thing that needs to be mentioned.

If you have the latest ReadyNAS 526X (read our review here) or ReadyNAS 626X, you know that it had a small, low power Bluetooth Dongle packed in the box.  Using the dongle and the Insight app, an administrator now has an alternate path into the server in the event the regular Ethernet connection has failed or is otherwise unavailable.

When we first tried out the Insight app it was a very early beta version.  Admittedly, Netgear still had some work to do in proving instructions on how the Bluetooth pairing worked on an iOS device.  In very short order they released another version, which is the current public beta (and available on the Community site here), which addressed both the documentation and performance issues on the Bluetooth pairing.

While we struggled to get the Bluetooth pairing to work on our iPhone initially, the process on the current beta version was quick and easy. 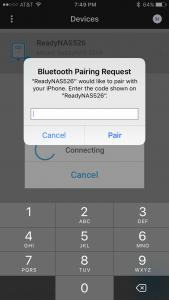 To start the pairing process you need to ensure that your iOS device is in Discovery mode.  You then need to plug the Bluetooth dongle into any of the USB ports on the ReadyNAS and a dialog box should pop up on your iPhone or iPad asking you to enter the pairing code that is now displayed on the ReadyNAS panel.

We entered the code displayed and within a few seconds the pairing was completed.

It’s unfortunate that you must be on your local network in order to connect to the server.  That does restrict administrators who might otherwise be able to manage an issue remotely.

That seems to be an area that Netgear still hasn’t tackled as the same is true for all the administrator function.  Even using the full browser based ReadyCloud service, admin functions are restricted to when you are on the local network only.

That said, our ReadyNAS units have required minimal, if any maintenance or attention.  Once we set them up, they really have taken care of themselves.  There will always be times when you may need to add new Shares and/or Users, but aside from that, they seem to just work.  We don’t think we are an exception.  We have seen similar comments on the Netgear Community site and received similar feedback from other Apple Tech Talk readers who own a ReadyNAS.

Even in its current state, we found the Insight app to be well designed and easy to use.  There are still a few rough edges on the Insight app and we have provided some feedback as a result of our testing.  Netgear has never been satisfied with the status quo and will certainly still make adjustments to the Insight app before and after its official release.  We also expect that more models of ReadyNAS servers will support the Bluetooth connectivity as they are refreshed and updated.

There is no question that Netgear is committed to the ReadyNAS product line.  As a company, Netgear continuously innovates and ReadyNAS is no exception.  They tend to release a software update to the ReadyNAS line on a quarterly basis and those updates always seem to include exciting new features in addition to the usual fixes and enhancements. In fact, OS 6.6.1 is already in Beta testing. We can also expect new and exciting product releases in the not too distant future.

Do you have a ReadyNAS or some other server in your home?  How do you use it and what do you like most about it?  Why not join the conversation by leaving a comment below.