We have reviewed Network Attached Storage (NAS) devices from most of the main manufacturers (read our reviews here), with more to come in the future.  Regardless of which brand or model is best for you, they all have one thing in common.  They need to be loaded up with hard drives. No matter how many, or the capacity of the drives, the Seagate IronWolf NAS Series Hard Drives deserve a spot in your NAS unit.

Why use a NAS Drive?

A question we get often is, “Can I use the hard drive from my computer in my NAS?”  We always answer it the same way, “Can you, yes, should you, NO!”

Although most hard drives look the same on the outside, they are very different on the inside.  Hard drives designed to be used in desktop computers are intended to be used 8 hours a day, 5 days a week.  They experience long periods of being idle and tend to be powered down often.

NAS drives, on the other hand, are designed to be on 24 hours a day, 7 days a week and handle a much heavier workload.  Consider these actual statistics.

We don’t want to just talk numbers. But there are some interesting differences in these two drives that are worth pointing out.

While there are many NAS units that have only two bays, you are probably buying the NAS to maximize your storage capacity and operate in a RAID configuration for data protection.  With a desktop drive you are limited to a smaller size drive.  If you are buying a NAS with 4, 5, 6 or 8 bays, you’ll want hard drives that can operate well in that environment.

We did some quick math and determined that 2400 hours equates to about 6.5 hours per day.  That is pretty average for computer use and that also means that the hard drive in that computer is off more than it is on so it has plenty of time to rest.

The NAS drive is also rated to handle over three times the workload of the desktop drive.

Finally, the desktop drive has a Mean Time Between Failure (MTBF) of 750,000 hours.  That’s over 85 years.  That doesn’t mean every hard drive will last that long but as a group that is their expected service before it fails.  That is pretty impressive.  Of course, the NAS drive has a MTBF of 1 Million hours, which is over 114 years.

We could go on but we think you get the point. The NAS drive is built to withstand the always on, data intensive service that is required of a NAS.

We had already been using Seagate NAS HDD in some of our NAS units but in July 2016, Seagate rebranded their drives as the Guardian series.  The Guardian Series is comprised of the BarraCuda line for Personal Computers and Gaming drives, the IronWolf line of NAS and RAID drives and the SkyHawk line of Surveillance drives.

For our testing we loaded our two 6TB Seagate IronWolf drives into a Drobo 5N2 NAS unit (read our review here.) Because of the Drobo’s no-carrier disk system, we were able to insert the IronWolf drives without any issue.  That would not have been the case if we were using our Netgear ReadyNAS 526X (read our review here), or any of the ReadyNAS units.

The Netgear drive trays have three small plastic pins on each side, which line up with the mounting holes on each side of the drive.  Our Seagate IronWolf drives have only two mounting holes.  The one in the middle is missing which makes the Netgear drive tray unusable.  This isn’t as serious a problem as it might sound as you can easily clip off the small piece of plastic on each side of the tray and the IronWolf drive will fit perfectly.

This could also be a problem for some models of the Synology NAS.  Some Synology units mount the drives in fixed brackets inside the unit and are designed to attach screws in the front and middle holes of the drive.  Since the Seagate IronWolf drives don’t have a middle screw hole, you are left with only one mounting point on each side of the drive.  That won’t affect the operation of the drive and under normal use should not be an issue but admittedly, it’s not the best mounting option.

We did discuss this with the folks at Seagate and can report that, at least for the 6TB IronWolf drives, the latest version, (Model # ST6000VN0033), released in August 2017, has the middle hole in the outer case.

We can’t speak to every all of the other sizes but the technical drawings for all but the 10TB size seem to show that they have the middle mounting hole.

We point this out more so you will know what to expect.  The two-hole version vs. the newer three-hole version is not a reason not to consider these drives.

It’s always tough for us to talk about hard drives since, for the most part, they look and act the same. But Seagate has packed a lot into the IronWolf series that is worth mentioning.

At 1.55 lbs., our 6TB IronWolf HDD has a very solid feel to it.  Inside are five platters with ten read/write heads and a spindle speed of 7,200 RPM and a 256MB Cache buffer. The drive is designed for multiple users, as you would find in a typical NAS environment as well as being optimized for use in a RAID environment. 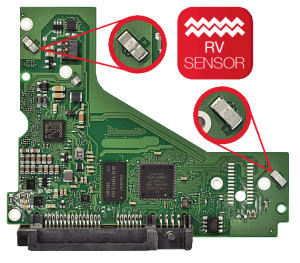 All Seagate IronWolf HDDs feature AgileArray, Seagate’s NAS optimisation technology which blends together drive balance, RAID error recovery and power optimisation.  The 4TB, 6TB, 8TB and 10TB IronWolf drives contain Rotational Vibration (RV) sensors, designed to protect the drive against damage caused by the vibration that can occur in larger multi-bay NAS enclosures. RV sensors are usually found in Enterprise class drives.  To our knowledge, the IronWolf drives are the first in this class of drives to have them installed.

If you have a need for all of the technical details that goes into this drive, we suggest you take a look at the User Manual on the Seagate site, which you will find here.

When the IronWolf drives were first released, there was a fair amount of discussion on NAS Discussion Boards about strange noises coming from the drives, especially when they were at idle.  Several people stated that Seagate provided a firmware update to fix the problem while others claimed that Seagate said this was the normal operation of the drives.

Having tested our 6TB Iron Wolf HDDs for several weeks we can say that these drives make a little more noise than what we heard from our 2TB Seagate NAS HDDs we used before but we would not consider the noise to be excessive or annoying.

It’s important to understand that there is a lot going on inside that relatively tiny enclosure.  With more platters in the drive, spinning almost 25% faster than our old drives, and much more sturdy components to support the 24 x 7 workload, you have to expect that you may hear more activity from these drives.

Aside from the occasional sounds made as the drives spin up, we would say the drives are almost silent when in full operation.  In fact, we hear more “disk chatter” from our WD My Passport Ultra portable hard drive (read our review here), which is connected to a MacBook pro and used for a Time Machine backup, than we do from the two 6TB Seagate IronWolf HDD in our Drobo 5N2, right next to it.

Power consumption is rated at 9.0 watts when active and only 7.2 watts when idle.

As more and more people put a NAS in their homes and offices, it’s important to pay attention to the hard drives holding all that important data.  Seagate has always has a reputation for making highly reliable hard drives for both on-site and portable storage.  They have been providing NAS quality hard drives for a long time and the new generation of IronWolf NAS drives takes the history of a great product and makes it better.

The IronWolf and IronWolf Pro hard drives are available in a variety of sized to fit all of your data storage needs now and in the future and are available from Amazon.

We would like to thank the folks at Seagate for providing the IronWolf 6TB drives for our testing and review.