Back on August 22, 2017, MEEM announced the launch of the MEEM Network (read the announcement here). But to take advantage of that you need to start with the MEEM Memory Cable.  We’ve now had a chance to check it out and think it’s a clever accessory that seems to be getting better all the time.

When it comes to backing up your iPhone or iPad, iTunes and iCloud are no longer your only options.  We have looked at desktop based solutions like MacX Media Trans (read our review here), and more portable hardware based devices like the OLALA iDisk (read our review here.)  They all have their pros and cons and in the end, did what they promised to do.

The MEEM Memory cable does the same basic backup of your data as the other products, but continues to expand its functionality which makes it worth of serious consideration.

MEEM Memory Cable is a Lightning connector cable that will charge your iPhone and iPod and also contains a memory chip that will back-up some of the most important information on your device.  Once you set up the free MEEM application on your device, it will automatically back up your Contacts, Calendar, Photos and Videos, every time you charge your phone.

Because the backed-up data is stored inside the MEEM Memory cable it doesn’t matter what the power source is for charging your device.  You can use your Mac, your iPhone power adapter or even a third party battery pack.  If it can charge your iPhone, MEEM will back up your data. 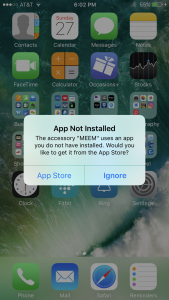 There isn’t much in the MEEM packaging.  You get the MEEM cable, and a Quick Start Guide.  To use the MEEM cable you simply connect it to a power source and plug it into your iPhone.  Almost immediately you get a message that tells you the MMEM cable needs an app and offers to take you right to the App Store. Download and installation of the MEEM app takes only a couple of minutes.

The app then opens and goes through an initial initialization.  Not surprising, the first thing the MEEM cable did was go through a firmware upgrade.  Once that was done, the app asks you to set a four (4) digit password, which is used to authenticate the user if you try to retrieve the MEEM data to a new phone.  The PIN also acts as a level of security for your data.  After 10 wrong PIN entries, MEM will lock and your data will be inaccessible. So you don’t really need to worry if you lose the cable or someone tries to use it to grab your personal information.

With the short set-up process completed the MEEM Memory Cable is ready to get down to business.

Once the set-up is complete, the MEEM Memory Cable pretty much takes care of itself.  Every time you plug in the cable, it opens the app and completed a backup.

To give you an idea of what the MEEM cable does, look at this video with MEEM CEO Kelly Sumner.

Once the backup is complete, the MEEM cable acts just like every other Lightning Connector charging cable. Almost.

The MEEM cable also protects you from accidently wiping data off your phone and cable unintentionally.  After you complete your first back up, your MEEM cable waits 20 seconds before it starts another backup. After that waiting period, the MEEM cable will alert you if the contents on your device has changed more that 5%. This is to ensure that if you have erased a lot of information from your device, you want to perform the same deletion on your MEEM.

Our usual routine is to plug our iPhone into the charging block at the end of the day and then power off the iPhone and let it charge overnight.  What we found with the MEEM Memory Cable is that if you power office iPhone, the MEEM cable will cause it to power back on after a couple of minutes.  We suspect it has something to do with the cable recognizing that it is connected to a phone and sensing that it needs to now do a backup.

This certainly won’t harm the cable of the iPhone but may be a bit of an annoyance if you keep the phone next to your bed and suddenly start hearing the tones associated with new mail and iMessages that may arrive overnight.  If you charge your iPhone next to your bed, you may want to consider muting the phone or turning on the Do Not Disturb feature when you connect the MEEM cable.

Back up multiple devices – The MEEM cable can backup up to three devices (smartphones and tablets) onto the same cable. This means you can make sure 3 devices are safely backed up to your MEEM at any time. When connecting a new device you will need to enter the original PIN setup on the cable to authorize the device. You can see all three devices on the home screen and in the Your Data menu where you can easily transfer data between them. You can also restore a new device from a complete backup on the home screen with just a swipe.

Archive your data – The MEEM cable can also work as external storage for your iOS device with its Archive Mode. This allows you to move data onto the MEEM cable and off your device or transfer data to your Mac using the MEEM Desktop app (more on that in a moment.)

Security – The MEEM cable uses the Advanced Encryption Standard (AES) with a 256-bit symmetric encryption algorithm, which is the equivalent security of an e-commerce transaction.

When the cable is used for the first time, the user is asked for a four-digit security pin. Once set, the data held on the cable cannot be accessed without the pin code, so even if you lose your MEEM cable, the data on it is protected.

If that is all MEEM did, we would consider it a worthwhile accessory for any iPhone owner. But it does much more.

MEEM offers a desktop app for both Windows and Mac which allows you to back up your iPhone directly to your desktop computer.  Like the iOS application, once the data is transferred, you can view all the detail to see exactly what is being stored on the cable.  To use the desktop application, just follow these simple steps.

The cable remains in Desktop mode if it remains connected to your Mac.  To return the cable to iOS mode, you need to disconnect it from the Mac, reconnect it to the iOS device and then connect it back to a power source or your Mac.

As we mentioned above, the MEEM Cable allows you to back up three (3) devices to a single cable. The MEEM Network, released in August 2017 (read the announcement here), adds wireless back up to the MEEM cable if one of those devices has the MEEM cable plugged into it.  You can also backup all device types and operating systems to one cable including iOS, Android, Windows, Linux, and Mac OS over the network which means you can backup data from any platform and access it from any platform.

This also allows you can have a secondary back up of all your information as well as access to all of your backed-up data from your computer.

With free iCloud accounts offering limited storage space, people are looking for new ways to protect all the data on their iOS devices. The MEEM cable provides an easy to use combination of hardware and software.

While the types of data you can back up are somewhat limited, it does, often represent the largest collection of data on your iPhone or iPad and as such, would leave a lot more room on your iCloud account for other types of data.

We would like to thank the folks at MEEM for providing a MEEM cable for our testing and review.