Last week we started our review of the Netgear Nighthawk X8 router.  If you missed our review, you can see it here.

In many respects, testing a router is pretty basic.  Either it connects you to the Internet or it doesn’t.  Everything else is secondary.  But the routers of today do so much more than that it’s hard to really evaluate everything or know what is important to any individual user.  Because of that, we try to look at what we consider to be some of the more important items.

Speed – Just getting connected to the Internet isn’t enough.  In today’s world, even a simple household presents a multi-device, online gaming, data streaming user group, and a router has to be able to meet those demands.  In many cases, the connections you make between your device and router are wireless so measuring the true speed of the router is difficult.  Our usual speed benchmark is to run a series of tests on the Speedtest.net site.  But since the speed at the end device will always be slower than what is entering or leaving the network, it’s difficult to know if the bottleneck is inside or outside of your network.  Netgear has addressed that problem by building the Speedtest.net service right into the router and having it controlled right from the Netgear Genie application.

As you can see in the image above, we are getting download speeds of 117.11 Mbps from our ISP who guarantees 100Mbps service.  If nothing else, we know we are getting what we paid for.  We have not seen any other routers offer this feature and we think this is more than just window dressing since it gives anyone overseeing your network an important diagnostic tool.

Network Integration – If you are setting up a network for the first time, it may not matter how easy it is to integrate other devices into your network since everything will need to be connected as a new device.  But if you have an existing network you probably don’t want to have to reconfigure every device just because you are upgrading your router.  For our tests, we configure the new router with the same SSID (Network Name) and password as the Airport Extreme Base Station that it is replacing and then see how well the existing wireless devices integrate with the new router.  In the case of the Netgear Nighthawk X8, we had mixed results.

As we have previously mentioned, we have several older Airport Express (802.11g) units, positioned throughout the building to stream music.  These obviously lost connection to the network when we powered off the Airport Extreme.  We were pleasantly surprised to see that all of them reattached to the new Netgear router when it came on line.  The music streamed to all of them without any additional configuration or need to adjust settings.

We had mixed results with the printers and scanners on our network.

The HP 6700 Color Printer actually worked perfectly.  Although it no longer showed up as a Shared Device in our Finder sidebar, it was listed as a registered device in the Netgear Genie application and print requests completed successfully.

Also see:  7 Techniques to Fix a Black Screen on a Mac

Our Brother ADS-1500W Scanner, (see our review here), was recognized by the router as a registered device but we were unable to successfully scan from it to our MacBook Pro, getting an error message that it was off line.  We attempted to fix that by going through the scanners set-up procedure but it kept reporting a configuration error.  After trying that a couple of times, we decided to try the WPS method since the scanner supports it.  That worked well and the scanner was back up and running within minutes.

Our final problem was our Brother HL-2270DW Laser Printer.  Like the other devices, it was in the Netgear Genie screen as a registered device and appeared as an installed printer in the OS X System Preferences but we could not get a print job to complete.  Each time we tried, the job would time out and the printer window would report that the printer was no available.  Like the Brother scanner, we made several attempts to reinstall the printer to our MacBook Pro but we were never able to get it to work.  We suspect that with a little more time we would have figured it out but it was clearly not as smooth a process as we would have liked.  It’s also interesting that both of the units that gave us a problem were Brother devices.  Maybe that is just a coincident or maybe there is something about them that is less “forgiving” than other brands.

External Devices – The Netgear Nighthawk X8 router has two USB ports that sit behind a small door at the front of the right side of the router.  All of the other routers we have seen so far put the USB ports on the rear.  Given that the X8 provides six (6) Ethernet ports while most others provide only four (4) there just wasn’t any room left on the back.

While our initial impression was that putting the USB ports at the front would make it easier to connect peripherals, we ultimately found it a little awkward to have to plug in our external hard drive near the front.  While it didn’t bother us to have the ports on the side, we would have preferred to have them towards the rear of the unit to make the cable management a little neater.  We also didn’t like the door used to cover the ports.  We felt it was in the way when we placed our external drive next to the router and could see it getting broken in the future if the router was moved or lifted with USB cables attached to the router.  Admittedly, this is more of a personal preference and certainly doesn’t affect the operation of the router and may not be of a concern to you.

We first attempted to attach our Drobo 5D Direct Attached Storage unit (see our review here) to the router.  The router recognized the unit and identified it with a drive letter (not something a Mac user is used to seeing), but we were not able to see the content on the drives.  We suspect that although the Drobo supports the HFS+ format, the RAID system and the format used is probably not compatible with the router, but we should note that the Drobo works fine when attached to the Airport Extreme and the data is easily shared across the network.  Perhaps a re-format of the Drobo would have solved the problems but we were not willing to do that as we would have lost the data on the unit.

We replaced the Drobo with a more conventional WD Elements External Hard Drive which was in the HFS+ format.  It was immediately recognized (with a different drive letter) and the content was easily readable. 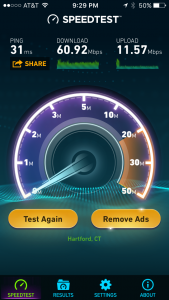 Coverage – While some users may use this, or any router for only wired Ethernet connections, we suspect that most users want a router like this for wireless connectivity and none of what we have discussed so far matters, it you can’t get the wireless signal where you need it.  In our testing, the X8 did extremely well.  While the speeds we saw from the Netgear Nighthawk X8 were comparable to those of other 802.11ac routers we have tested, we noticed that the signal remained stronger even as we moved farther away from the router.  Where we would generally see a decrease in the Wi-Fi icon on our iPhone 5s using the Airport Extreme, we got all of the bands at the same and greater distances with the X8.

We suspect this is a combination of the Quality of Service (QoS) function, the Beamforming+ technology and the active antennas on the X8 router.  Overall, we were very pleased with the coverage and signal strength.

Remote Access– As we have said in the past, having the ability to access an external hard drive connected to a Wi-Fi router should not be considered a replacement for a full featured Network Attached Storage (“NAS”) device like the Netgear ReadyNAS RN202 or the Synology DS-216 (follow the links to see our reviews), but if all you need is some basic remote file access, the Netgear Nighthawk X8 doesn’t disappoint.

Since we are using a ReadyNAS RN202 on our network, we already have a ReadyCLOUD account set up to provide us remote access to the server.  Getting access to the X8 was simply a matter of going into the X8 administration page and entering our ReadyCLOUD user ID.  This registers the router with the ReadyCLOUD system.  After that, logging in to ReadyCLOUD, either from the desktop application or from the iOS app showed both the RN202 and the R8500 router.

The Netgear Nighthawk X8 router also has the ability to act as a media server including the ability to stream music from your iTunes library as well as play video files stored on a USB device attached to the router to a TiVo device on your network.  We did not test either of these functions.

The X8 doesn’t run application like Plex, as does the RN202 but for basic media streaming this may meet your needs.

Despite our issues with some printers and the Drobo 5D, we like the overall performance of the Netgear Nighthawk X8 router.  While larger in size than the Apple Airport Extreme Base Station, there are comparable routers that take up far more shelf space and we actually think the overall design of the hardware is nice.

The external active antennas appear to make a real difference in the range and signal strength and provided good signal coverage overall.  The router offers a lot of features with its six LAN ports, two of which can be aggregated as well as the USB 2.0 and USB 3.0 ports for connecting external printers and drives.  Finally, the easy integration into Netgear’s ReadyCLOUD service makes remote access to the router and any attached storage extremely simple.

The design is not perfect and we particularly don’t like the location of the USB ports on the front side of the router, or the plastic door that covers them when not in use. But our opinion is based on our particular set-up.  You may find that it is extremely convenient based on where you place any external devices.

The Netgear Nighthawk X8 router is one of the more expensive routers we have looked at so far with a MSRP of $399.99 but is available at a discounted price through Amazon.

If you are looking for a router that will meet your needs today and well into the future, the Netgear Nighthawk X8 router deserves strong consideration.

We wish to thank the folks at Netgear for providing us with the X8 router for our evaluation.